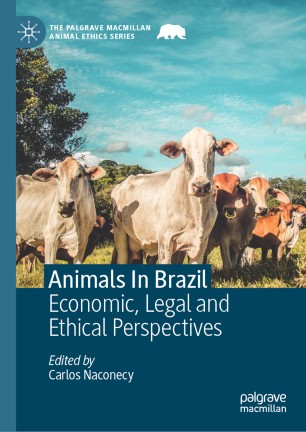 This book presents a collection of essays exploring the legal, economic, socio-environmental, and ethical dimensions of human-animal interaction in Brazil. As one of the primary global producers and exporters of beef, with a level of biodiversity in its rain forests found nowhere else under threat, the importance of Brazil for animal life is unquestionable. Shedding light on the profound transformations in the consumption and production of animal-sourced foods that have taken place over the last five decades, the authors examine the consequences of this phenomenon for the lives of animals, the health of the population, and the environment. The book also offers an analysis of the animal welfare and animal protection legislation in Brazil, before presenting a number of notable cases involving animal advocacy and activism in recent years. An important and timely collection, this book concludes with an exploration of the historical, socio-cultural and economic aspects that influence the Brazilian ethos regarding the morality of the treatment of animals.

Carlos Naconecy, PhD, is a Brazilian philosopher specializing in animal ethics and life ethics. He is an independent scholar and author, as well as a Fellow of the Oxford Centre for Animal Ethics. Naconecy has presented academic papers in South America, Europe, the Middle East and Asia. In addition to his scholarship, he has made numerous appearances in popular media on the topic of animal ethics and moral vegetarianism in Brazil.