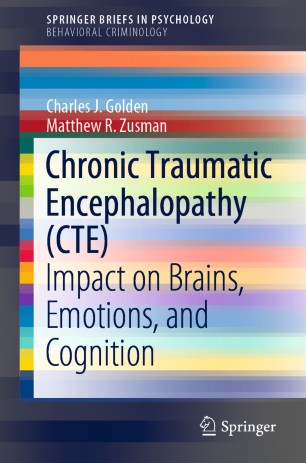 Impact on Brains, Emotions, and Cognition

The term chronic traumatic encephalopathy (CTE) has recently gained a significant amount of media coverage. However, a large proportion of the information disseminated through the media pertaining to the etiology, neuropathology, and clinical manifestations of CTE are not corroborated by empirical research, and are disputed by prominent researchers who study sports related head injury.

This book reviews the existing literature pertaining to these components of CTE and includes unique case studies of several retired NFL players that received a comprehensive neuropsychological battery from a board certified neuropsychologist, among other populations. It investigates the claim that CTE causes depression, violent behavior, and an increased risk for suicide by providing an in depth discussion using empirical data.  Highlighting the importance of adhering to post concussion protocol and appreciating the long-term consequences of repeated head trauma, this unique review of the current research on CTE will be useful to students and professionals in psychology and neurology.

Matthew R. Zusman, M.S., earned his BA in psychology at University of California Los Angeles, and has just completed his PsyD in clinical psychology from Nova Southeastern University. His current research focuses on exploring the combined factor structure of popular objective personality assessments, and identifying metrics to discriminate between different types and severity levels of neurodegenerative diseases. He is the program and research coordinator for the Nova Counseling Center for Older Adults at the Psychology Services Center at Nova Southeastern University. He has been first author on seven posters that were accepted to major national conferences in the field of neuropsychology and co-authored a book on the neuropsychological assessment of learning disorders. He is also the event coordinator and director of student chapters for the Society for Brain Mapping and Therapeutics (SBMT).