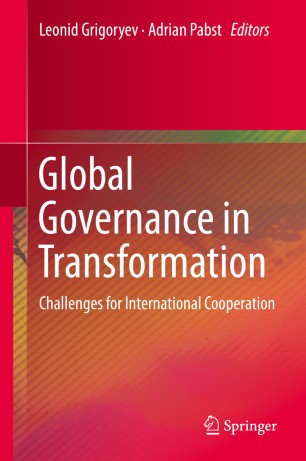 This book analyzes the state of global governance in the current geopolitical environment. It evaluates the main challenges and discusses potential opportunities for compromise in international cooperation. The book’s analysis is based on the universal criteria of global political stability and the UN framework of sustainable development. By examining various global problems, including global economic inequality, legal and political aspects of access to resources, international trade, and climate change, as well as the attendant global economic and political confrontations between key global actors, the book identifies a growing crisis and the pressing need to transform the current system of global governance. In turn, it discusses various instruments, measures and international regulation mechanisms that can foster international cooperation in order to overcome global problems.

Addressing a broad range of topics, e.g. the international environmental regime, global financial problems, issues in connection with the energy transition, and the role of BRICS countries in global governance, the book will appeal to scholars in international relations, economics and law, as well as policy-makers in government offices and international organizations.

Leonid Grigoryev is a Tenured Professor and Scientific Head of Department at the School of World Economy at the Higher School of Economics in Moscow, Russia; a Chief Adviser to the Head of the Analytical Center for the Government of the Russian Federation; and since 1999, has been member of the Council of Foreign and Defense Policy in Russia. Previously, he was the Deputy Minister of Economy and Finance, Chairman of the Foreign Investment Committee (1991-1992), Deputy Director General and Head of Research at the Russian Energy Agency (1971-2005) as well as President of the Association of Independent Centers of Economic Analysis (ARETT) (2002-2005). He has published more than three hundred research papers, edited a dozen books and produced numerous scientific media pieces. His research focuses on Russian Transition and he has worked extensively on global growth, energy, business cycles, elites, middle class and inequality for the past two decades. Moreover, Grigoryev is an active member of the National Research Council on BRICS.

Prof Adrian Pabst is a Professor of Politics at the University of Kent, Canterbury, UK and fellow of the National Institute of Economic and Social Research (NIESR). His research focuses on the interface of political theory and political economy. He has a particular interest in the interaction between traditions of political economy and contemporary international politics. Having studied Economics at the University of Cambridge, UK and  a master’s degree at the London School of Economics, he returned to Cambridge to obtain his Ph.D. His work on political economy has been published in a variety of economics journals, including International Review of Economics, Constitutional Political Economy and History of Political Economy. He is the editor of The Crisis of Global Capitalism (Cascade 2011), Blue Labour (I. B. Tauris 2015) and the author of The Politics of Virtue (Rowman & Littlefield 2016), Liberal World Order and Its Critics (2018) and The Demons of Liberal Democracy (2019).