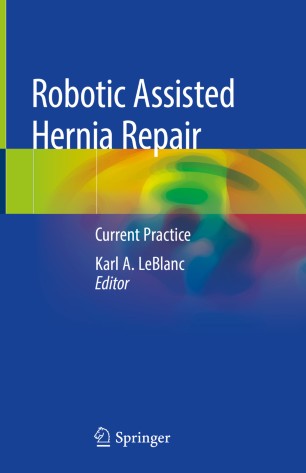 This book provides a guide to procedures and techniques related to robotic hernia repair. Sections covering inguinal, incisional, and diaphragmatic hernias are included. Each section will cover the setup of the operating room and the management of adverse events specific to the hernia. The steps involved in performing an operation and key components to a successful repair are also covered

Karl Andrew LeBlanc, MD, MBA, FACS, FASMBS, Abdominal wall, bariatric and general surgeon, Baton Rouge, LA, USA, 1984-present.  Attended the Louisiana State School of Medicine in Shreveport, LA, and USA from 1974-1978, followed by a General Surgical Residency from 1978-1983.  From 1983-1984, he returned to his hometown of Breaux Bridge, LA, USA but saw the need to pursue his career in a larger city.  He remains active in the private practice of general surgery, specializing in herniology and bariatric surgery.  He is Professor of Surgery at the Louisiana State School of Medicine Department of Surgery and Associate Medical Director of Surgery of the Our Lady of the Lake Physician Group. Born in a rural area of southern Louisiana known for its “Cajun” heritage, he pursued his undergraduate education in nearby Lafayette, LA at the University of Southwestern Louisiana.  Even at that early age, he was interested in the medical field.  During his surgical residency, the interest in hernia was sparked and this has been with him ever since then.  During this residency, he was able to become familiar with laparoscopic surgery and used it for diagnostic purposes.  Once the laparoscopic era of general surgery began, he rapidly engaged in the advancement of this wonderful tool.  His research led to his performance of the world’s first laparoscopic incisional hernia repair in 1991.He is a founding member of the Americas Hernia Society and has served as its President.  He sits on the Editorial Board of the journals Hernia and the Journal of the Society of Laparoendoscopic Surgery and a peer reviewer for numerous national and international journals.  He has lectured internationally on numerous topics.  He has edited or co-edited five surgical texts, some of which has been translated into Turkish and Chinese.  He has authored over numerous articles and/or book chapter contributions.  Research continues to be an area of interest and he serves a principal investigator of several projects at this time.

“This book is clearly intended for fellows in minimally invasive surgery with interest in hernia repair as it only addresses this subject with great attention to even the minor details. It is an advanced must-read book for surgeons seeking to specialize in robotic hernia repair, with little benefit to those who do not wish to pursue this sophisticated field.” (Tareq Z AlQasas, Doody’s Book Reviews, May 1, 2020)