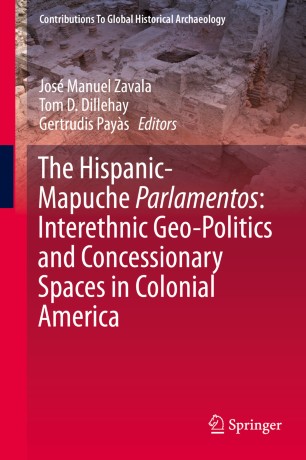 Anthropological histories and historical geographies of colonialism both have examined the material and discursive processes of colonization and have identified the opportunities for different kinds of relationships to emerge between Europeans and the indigenous people they encountered and in different ways colonized. These studies have revealed complex, differentiated, colonializing and colonialized identities, shifting and ambiguous political relations, social pluralities, and mutating and distinctive modes of colonization.

This book focuses on the complementary historical, linguistic, and archaeological evidence for indigenous resistance and resilience in the specific form of parlamento political negotiations or attempted treaties between the Spanish Crown and the Araucanians in south-central Chile from the late 1600s to the early 1800s.  Armed conflict, the rejection of most Spanish material culture, and the use of the indigenous Mapundungun language at parlamentos were obvious forms of Araucanian resistance.

From a bigger picture, the book is based on an interdisciplinary perspective and asserts that historical archeology can provide better interpretations of past societies only if combined with other disciplines experienced by the treatment of existing data for historical periods, such as those provided by the written documents and which can be subjected to an anthropological, ethnohistorical, and linguistic reading by these disciplines. This creates tension because complementarity but also requires a questioning of the methods themselves as an offset look in order to include the other disciplinary perspectives.​

indigenous resistance and resilience use of Mapundungun language at "parlamentos" treaties between the Spanish Crown and Araucanians historical, linguistic, and archaeological evidence historical geographies of colonialism