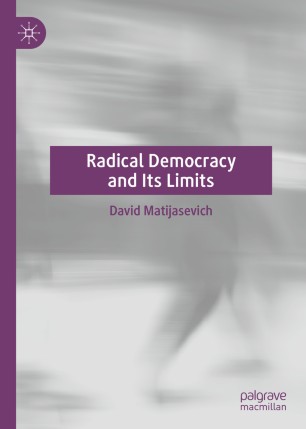 Radical Democracy and Its Limits

Over the last several decades, many political theorists have touted the banner of “radical democracy” to view the agonistic—that is, non-coercive—struggle against power as the correct way forward for progressive political actors, rather than the antagonistic acquisition or use of it. The belief that such engagements respect the political equality of all and are thus more democratic lies at the heart of this trend; and yet, recent developments have shown that events with such agonistic beginnings, such as Occupy, the Arab Spring, and Hong Kong’s Umbrella Movement have the clear potential of ending antagonistically. Comparing four historical cases of popular uprising that fluctuated between agonistic and antagonistic moments, this book establishes the circumstances under which such agonistic engagements with power can both take off and persist. Revealing the many limitations that agonistic politics is shown to face, Radical Democracy and its Limits makes a needed intervention into contemporary democratic theory and argues that radical democracy should not be held up as a model for those pursuing a more egalitarian future.