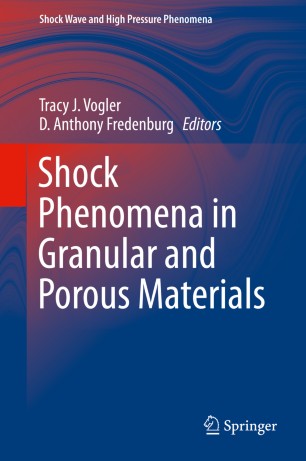 Granular forms of common materials such as metals and ceramics, sands and soils, porous energetic materials (explosives, reactive mixtures), and foams exhibit interesting behaviors due to their heterogeneity and critical length scale, typically commensurate with the grain or pore size. Under extreme conditions of impact, granular and porous materials display highly localized phenomena such as fracture, inelastic deformation, and the closure of voids, which in turn strongly influence the bulk response. Due to the complex nature of these interactions and the short time scales involved, computational methods have proven to be powerful tools to investigate these phenomena. Thus, the coupled use of experiment, theory, and simulation is critical to advancing our understanding of shock processes in initially porous and granular materials.

This is a comprehensive volume on granular and porous materials for researchers working in the area of shock and impact physics. The book is divided into three sections, where the first presents the fundamentals of shock physics as it pertains to the equation of state, compaction, and strength properties of porous materials. Building on these fundamentals, the next section examines several applications where dynamic processes involving initially porous materials are prevalent, focusing on the areas of penetration, planetary impact, and reactive munitions. The final section provides a look at emerging areas in the field, where the expansion of experimental and computational capabilities are opening the door for new opportunities in the areas of advanced light sources, molecular dynamics modeling, and additively manufactured porous structures.By intermixing experiment, theory, and simulation throughout, this book serves as an excellent, up-to-date desk reference for those in the field of shock compression science of porous and granular materials.

Dr. Tracy Vogler received a B.S. in Engineering Science and Mechanics from Virginia Tech.  As a Hertz Fellow, he received a S.M. in Aeronautics and Astronautics from MIT and a Ph.D. in Engineering Mechanics from the University of Texas at Austin.  His research as a student focused on the behavior and failure of fiber composites.  Following a post-doc at the U.S. Army Research Laboratory, he joined the experimental shock physics group at Sandia National Laboratories in Albuquerque, New Mexico in 2001.  In 2008 he transferred to Sandia’s location in Livermore, California and is currently a Distinguished Member of the Technical Staff in the Mechanics of Materials department.

Dr. Vogler’s research interests include the dynamic behavior of granular materials, the high-pressure strength of materials such as metals and ceramics, failure and fracture of materials, and the blast loading of structures. He is involved in both experiment, which utilize the Z machine, gas guns, and explosives, and simulations using the DOE's high-performance computing platforms.

Dr. Vogler is an associate editor of the Journal of the Dynamic Behavior of Materials.  He has also been active in the American Physical Society Topical Group on Shock Compression of Condensed Matter, serving as an officer for six year between 2007 and 2014 and co-organized the group's biennial meeting in 2011.  He currently resides in Livermore, California and enjoys running and other outdoor activities as well as coaching youth track and cross country.

Dr. D. Anthony Fredenburg received his formal education in Materials Science and Engineering from North Carolina State University and the Georgia Institute of Technology.  His research into the dynamic response of porous materials began during his tenure at Georgia Tech, where his thesis work focused on developing a framework for utilizing the quasi-static densification behavior of granular mixtures to predict their response under dynamic loading. Since that time he has continued to pursue advancements in the field of granular shock physics with an eye toward predictive compaction modeling.

Currently residing in Santa Fe, NM, Dr. Fredenburg continues to engage in the high pressure science of both granular and solid materials at Los Alamos National Laboratory. In recent years his research has shifted more toward modeling and simulation, where he is able to couple advanced material models and theories to a wide range of dynamic impact applications. While not pursuing scientific endeavors, Dr. Fredenburg enjoys spending time with his growing family and engaging in activities such as hiking, running, and boating.