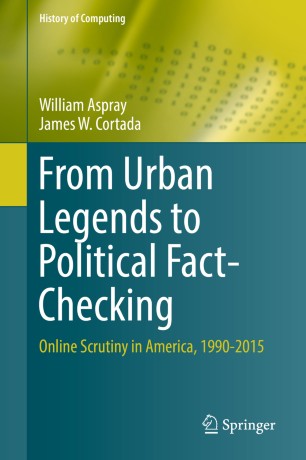 From Urban Legends to Political Fact-Checking

This text presents an historical examination of political fact-checking, highlighting how this is part of a larger phenomenon of online scrutiny that manifests itself in multiple forms. Reflecting the long history of “fake facts” in America, the book discusses important developments in this area from the emergence of the public Internet in the 1990s to the start of the Trump-Clinton presidential election campaigns.

This timely study touches on issues of popular culture and major events, and offers profiles of colorful individuals and organizations, and as such will appeal to a broad audience interested in the history of fact-checking and efforts to protect the political process from falsehoods.

Dr. William Aspray is a full professor in the Department of Information Science at the University of Colorado Boulder. His other publications include the Springer books Participation in Computing: The National Science Foundation’s Expansionary Programs and Women and Underrepresented Minorities in Computing: A Historical and Social Study. Dr. James W. Cortada is a Senior Research Fellow at the Charles Babbage Institute at the University of Minnesota.