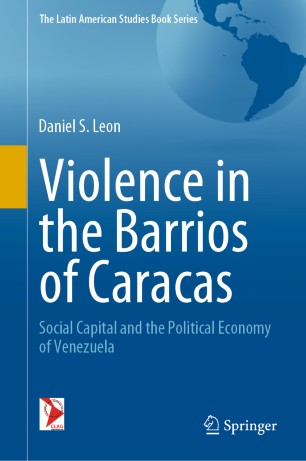 Violence in the Barrios of Caracas

Social Capital and the Political Economy of Venezuela

This book presents an overview of the problem of urban violence in Caracas, and specifically in its barrios. It helps situate readers familiar or not with Latin American in the context that is Caracas, Venezuela, a city displaying one of the world’s highest homicide rates. The book offers a qualitative comparison of the informal mechanisms of social control in three barrios of Caracas. This comprehensive analysis can help explain high homicide rates, while socio-economic conditions improved due to substantial oil windfalls in the twenty-first century. The author describes why informal social control was not effective in some barrios, and points to the role of some organizational arrangements in increasing the incentives to use violence, even under improving socio-economic conditions.

The analysis addresses a gap in the literature on violence, which mainly posits high violence rates after economic downturns. Specifically, it investigates social capital's moderating effect between Caracas' political and economic structures and high violence rates. This book concludes that perverse social capital found in the barrios of Caracas helps explain high violence rates while socio-economic indicators improved until the early 2010s. Students and researchers interested in security studies or Latin America will benefit from this book because of its extensive theoretical discussions, use of primary sources, and unique multidisciplinary analysis of urban violence.

Daniel S. Leon was born in Merida, Venezuela and he earned a B.A. in International Relations at Florida International University and an M.A. in Political Science at The American University in Cairo. He also successfully completed a doctoral degree in Global Studies from the University of Leipzig. His research interests include contentious politics, rentier states, political transitions, and conflict studies, particularly in Latin American urban spaces.