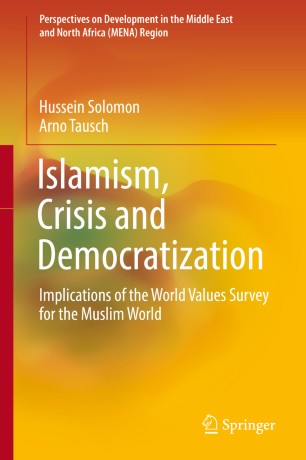 Implications of the World Values Survey for the Muslim World

This book systematically assesses the value systems of active Muslims around the globe. Based on a multivariate analysis of recent World Values Survey data, it sheds new light on Muslim opinions and values in countries such as Indonesia, Iran, Tunisia, Egypt and Turkey. Due to a lack of democratic traditions, sluggish economic growth, escalating religiously motivated violence, and dissatisfaction with ruling elites in many Muslim countries, the authors identify a crisis and return to conservative values in the Muslim world, including anti-Semitism, religious and sexual intolerance, and views on democracy and secularism, business and economic matters. Based on these observations, they offer recommendations for policymakers and civil societies in Muslim countries on how to move towards tolerance, greater democratization and more rapid economic growth.

Hussein Solomon is a Senior Professor at the Department of Political Studies and Governance, University of the Free State, South Africa. He is also a Visiting Professor at Osaka University, Japan and a Senior Research Associate of Research on Islam and Muslims in Africa (RIMA) in Jerusalem, Israel. He has previously served as a Visiting Professor at Stellenbosch University, a Research Fellow at the London School of Economics and Political Science, and a Senior Visiting Fellow at the Department of War Studies, King’s College, University of London.

Arno Tausch is currently Honorary Associate Professor of Economics, Corvinus University, Budapest, Hungary (since Fall Semester 2010) and Adjunct Professor (Universitaetsdozent) of Political Science at Innsbruck University, Department of Political Science, Innsbruck University, Austria (since 1988). He entered the Austrian Civil Service on January 1, 1992, and retired from active service on February 29, 2016. He served as an Austrian diplomat abroad and was Attaché, and later Counselor for Labor and Migration at the Austrian Embassy in Warsaw, 1992-1999. Since 1978, he taught numerous regular courses in political science, economics and sociology at Universities in Austria, Hungary, Switzerland and in the United States. He authored or co-authored books and articles for major international publishers and journals, among them 19 books in English, 2 books in French, 8 books in German, and around 100 articles in peer-reviewed journals and also numerous articles in the media of several countries. His publications also include a number of essays for leading economic and foreign policy global think tanks like the Institute for National Security Studies (INSS), Tel Aviv, Israel; IZA Institute of Labour Economics (Bonn), Polish Institute for International Affairs PISM, Warsaw; and the Vienna Institute for International Economic Studies (WIIW).