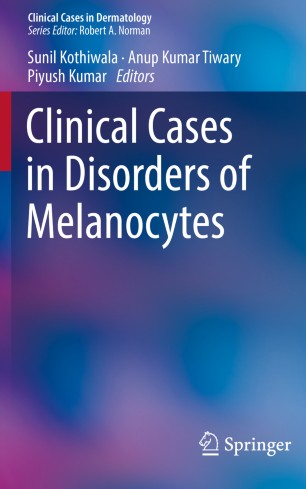 Clinical Cases in Disorders of Melanocytes

Part of the Clinical Cases in Dermatology book series (CLIDADE)

Clinical Cases in Disorders of Melanocytes aims to aid clinical decision making and the recognition of subtle symptoms and is relevant to trainees and clinicians working within dermatology.

Sunil Kothiwala, MD (Dermatology) is post graduated from All India Institute of Medical Sciences (AIIMS), New Delhi in year 2013. He has been awarded with Dr. B N Satyanarayanan Memorial Award for IADVL thesis Evaluation in 2013 at national level. He is the winner of scholarship at annual meeting of British Association of Dermatologists, Glasgow in 2014. He has served in SMS Medical College & Hospital, Jaipur from 2013 to 2015 and contributed in teaching & examinations of postgraduate students. He has been assistant professor in JNUIMSRC, Jaipur from 2015 to 2017. He is editorial board member of Journal of Surgical Dermatology. He has more than 15 publications in indexed journals and has authored more than 5 chapters in various textbooks. Psoriasis, acne, dermatosurgery, vitiligo surgery and lasers are his special interest areas.Anup Kumar Tiwary did his M.D. in dermatology from Rajendra Institute of Medical Sciences (RIMS), Ranchi in the year 2016. He was awarded a Gold medal in 12 th Zonal conference of IADVL east zone ‘Dermazone East 2014, Jamshedpur’. He has won the ‘Interactive quiz of Indian Dermatology Online Journal’ (quiz no.21). He has served as Assistant Professor in Government Medical College and Hospital, Haldwani from 2017 to 2018 . He has been teaching and honing clinical skills of undergraduates and postgraduate students at RIMS and GMC Haldwani. He is currently Associate Editor of journals - ‘Dermatology and Dermatologic diseases’ and ‘Clinical Dermatology Open Access Journal (CDOAJ)’. He is reviewer of Journal of American Academy of Dermatology Case Reports (JAAD-CR). He has more than 30 publications in indexed international and national journals. He is currently working on few chapters to be published in various international textbooks. He has attended numerous workshops and hands-on sessions in areas of his special interest namely -PRP, BOTOX, FILLERS, Chemical peels, Vitiligo Surgery, ETHICON Suture Practicum, Cosmetology and Dermatoscopy. Piyush Kumar, MD did his post-graduation in Dermatology from Medical College and Hospital, Kolkata and was awarded Best Post graduate student in Dermatology of 2008-11 batch. After finishing his post-graduation, he joined Katihar Medical College and Hospital, Katihar as Assistant Professor (2011-2015) and later was promoted to the post of Associate Professor (December 2015- present). He has been actively interested in academics and has published more than 100 papers in Indexed National and International journals. He was awarded International League of Dermatological Societies (ILDS) scholarship (for World Congress of Dermatology 2011, Seoul, south Korea) and Imrich Sarkany Non-European Memorial Scholarship (for 26th European Academy of Dermatology and Venereology (EADV) Congress 2017, Geneva, Switzerland). He has written eight (8) chapters in various National textbooks and reference books. He has contributed 12 chapters for two International books (7 chapters in the book "Pediatric Allergy and Clinical Immunology". Editor: Nima Rezaei. Publisher: Springer (In press); 5 chapters in the book "Atlas of Dermatology, Dermatopathology and Venereology". Editors: Nooshin Bagherani, Bruce R. Smoller. Springer (Ongoing)). Currently, he is working on two books as an editor- "Nail disorders: A comprehensive approach", CRC Press India; and "Atlas of Clinical Dermatology in Coloured Skin: A Morphological Approach", CRC Press India.