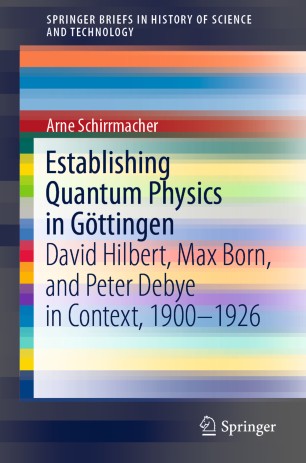 Quantum mechanics – the grandiose theory that describes nature down to the submicroscopic level – was first formulated in Göttingen in 1925. How did this come about and why is it that Göttingen became the pre-eminent location for a revolution in physics? This book is the first to investigate the wide range of factors that were pivotal for quantum physics to be established in Göttingen. These include the process of generational change of physics professors, the hopes of mathematicians seeking new fields of research, and a new understanding of the interplay of experiment, theory and philosophy.

After earning a PhD in theoretical physics, Arne Schirrmacher specialized in the history of science, in particular the history of modern physics, popular science and science museums. He was a researcher at the Deutsches Museum in Munich for many years and now works as a Heisenberg Fellow at the Humboldt University in Berlin.