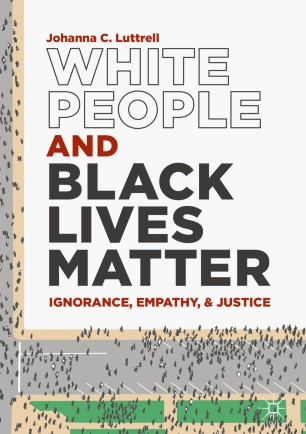 This book interrogates white responses to black-led movements for racial justice. It is a philosophical self-reflection on the ways in which ‘white’ reactions to Black Lives Matter stand in the way of the movement’s important work. It probes reactions which often prevent white people from according to black activists the full range of human emotion and expression, including joy, anger, mourning, and political action. Johanna C. Luttrell encourages different conceptions of empathy and impartiality specific to social movements for racial justice, and addresses objections to identity politics.

Johanna C. Luttrell is Instructional Assistant Professor in the Hobby School of Public Affairs at the University of Houston, USA.

“Luttrell's White People and Black Lives Matter: Ignorance, Empathy and Justice is a timely contribution to ongoing conversations about identity, positionality, moral affect, and political awareness. Luttrell engages in a direct and clear inquiry into what whites ethically owe black social movements and suggests that new modes of self-awareness and moral and political knowledge are the duties facing white Americans. Living up to those duties opens the way to solidarity and a proper relationship and capacity to ally with movements such as Black Lives Matter. Luttrell has provided a unique account of white identity politics that will prove useful reading alongside work in black political thought.” (Christopher Lebron, Associate Professor of Philosophy at Johns Hopkins University and author of The Making of Black Lives Matter: A Brief History of an Idea)

“This book engages the cannon of political philosophy with regard to the cannon of black activism, but Luttrell’s book achieves more than just a revision to the history of western political thought. Throughout this text, Luttrell challenges what it means to think the political within a racialized context, while highlighting the collective and critical work that continues to be demanded of white allies in the struggle for a more just society. Timely, fearless, and honest, this book challenges its readers to reexamine the crisis that white identity poses for itself politically while also illustrating a method of engaging philosophically in the crises that define us.” (Alfred Frankowski, Assistant Professor, Department of Philosophy, Southern Illinois University, Carbondale, and author of The Post-Racial Limits of Memorialization: Toward a Political Sense of Mourning)

“Johanna C. Luttrell interrogates self-defensive and dismissive reactions by whites of Black Lives Matters and related movements, and she extends this critique to positions of ally-ship that are thin and self-serving. Instead of self-defensive dismissals of their tactics, she urges listening and a fortified commitment to reform systemic injustices. This leads her to argue that insiders of social movements are the most qualified to judge the tactical efficacy of those movements, and that a demanding and probing empathy is required to properly engage these movements. This book takes fair-weather allies of racial justice movements to task, and invites critical engagement and, ultimately, serious self-reflection.” (Ronald R. Sundstrom, Professor of Philosophy at the University of San Francisco, and author of The Browning of America and the Evasion of Social Justice)