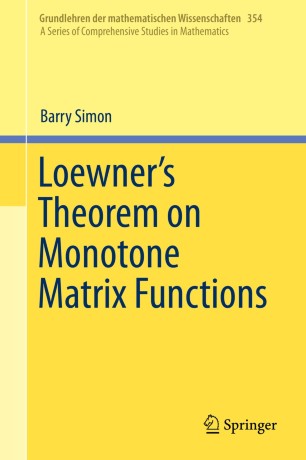 This book provides an in depth discussion of Loewner’s theorem on the characterization of matrix monotone functions. The author refers to the book as a ‘love poem,’ one that highlights a unique mix of algebra and analysis and touches on numerous methods and results. The book details many different topics from analysis, operator theory and algebra, such as divided differences, convexity, positive definiteness, integral representations of function classes, Pick interpolation, rational approximation, orthogonal polynomials, continued fractions, and more. Most applications of Loewner’s theorem involve the easy half of the theorem. A great number of interesting techniques in analysis are the bases for a proof of the hard half.  Centered on one theorem, eleven proofs are discussed, both for the study of their own approach to the proof and as a starting point for discussing a variety of tools in analysis.  Historical background and inclusion of pictures of some of the main figures who have developed the subject, adds another depth of perspective.
The presentation is suitable for detailed study, for quick review or reference to the various methods that are presented. The book is also suitable for independent study.  The volume will be of interest to research mathematicians, physicists, and graduate students working in matrix theory and approximation, as well as to analysts and mathematical physicists.

Barry Simon is the IBM Professor of Mathematics and Theoretical Physics, Emeritus, at Caltech, known for his contributions in spectral theory, functional analysis, and nonrelativistic quantum mechanics, and including the connections to atomic and molecular physics. He has authored more than 400 publications on mathematics and physics. Simon's work has focused on broad areas of mathematical physics and analysis covering: quantum field theory, statistical mechanics, Brownian motion, random matrix theory, general nonrelativistic quantum mechanics, nonrelativistic quantum mechanics in electric and magnetic fields, the semi-classical limit, the singular continuous spectrum, random and ergodic Schrödinger operators, orthogonal polynomials, and non-selfadjoint spectral theory. Simon is a recently elected member (2019) of the National Academy of Science  and a member of the American Academy of Arts and Sciences.  Simon is a recipient of  the Henri Poincaré Prize (2012), the Bolyai Prize of the Hungarian Academy of Sciences (2015), the Steele Prize for Lifetime achievements (2016), and  the Dannie Heineman Prize for Mathematical Physics from the American Physical Society (2018). He is also a fellow of the American Mathematical Society and  the American Physical Society.

“This book will be a valuable reference for anyone interested in any aspect of Loewner's theorem. The variety of techniques used in the eleven proofs also makes the text a good introduction to many standard methods in functional analysis and function theory.” (Linda J. Patton, Mathematical Reviews, October, 2020)
“Doubtless, this 43-chapter book is very well written in a reader-friendly style. Chapters include some historical remarks and helpful comments. The reviewer would like to recommend the book strongly to postgraduate students and mathematicians interested in operator inequalities.” (Mohammad Sal Moslehian, zbMATH 1428.26002, 2020)
Buy options