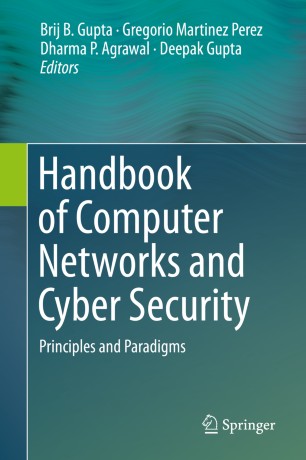 This handbook introduces the basic principles and fundamentals of cyber security towards establishing an understanding of how to protect computers from hackers and adversaries. The highly informative subject matter of this handbook, includes various concepts, models, and terminologies along with examples and illustrations to demonstrate substantial technical details of the field. It motivates the readers to exercise better protection and defense mechanisms to deal with attackers and mitigate the situation. This handbook also outlines some of the exciting areas of future research where the existing approaches can be implemented.
Exponential increase in the use of computers as a means of storing and retrieving security-intensive information, requires placement of adequate security measures to safeguard the entire computing and communication scenario. With the advent of Internet and its underlying technologies, information security aspects are becoming a prime concern towards protecting the networks and the cyber ecosystem from variety of threats, which is illustrated in this handbook.
This handbook primarily targets professionals in security, privacy and trust to use and improve the reliability of businesses in a distributed manner, as well as computer scientists and software developers, who are seeking to carry out research and develop software in information and cyber security. Researchers and advanced-level students in computer science will also benefit from this reference.

Brij B. Gupta received his PhD degree from the Indian Institute of Technology Roorkee, India in the area of Information and Cyber Security. In 2009, he was selected for the Canadian Commonwealth Scholarship award by the Government of Canada. He has published more than 150 research papers (including 04 books and 18 book chapters) in International Journals and Conferences of high repute including IEEE, Elsevier, ACM, Springer, Wiley, Taylor & Francis, Inderscience, etc. He has visited several countries, i.e. Canada, Japan, Australia, China, Spain, Hong-Kong, Italy, Malaysia, Macau, etc. to present his research work. His biography was selected and published in the 30th Edition of Marquis Who's Who in the World, 2012. In addition, he has been selected in 2017 to receive the Albert Nelson Marquis Lifetime Achievement Award’ by Marquis Who's Who in the World, USA. He also received the Sir Visvesvaraya Young Faculty Research Fellowship Award in 2017 from the Ministry of Electronics and Information Technology, Government of India. Recently, he has been awarded with ‘2018 Best Faculty Award for research activities’ and ‘2018 Best Faculty Award for Project and Laboratory Development’ from the National Institute of Technology Kurukshetra, India.
Gregorio Martínez Pérez received a Ph.D. degree in Computer Science at the University of Murcia (Spain). In 1997 he started working in Computer Service of the same University on various projects on end-user products related to security and networking, and in 2014 he was appointed as Full Professor in the same department. His scientific activity is mainly devoted to cybersecurity, privacy and 5G networking, including security considerations, management models, network slicing and communication architectures. He is also working on the design and autonomic monitoring of real-time and critical applications and systems. He is working on different national (14 in the last decade) and European IST research projects (11 in the last decade) related to these topics, being Principal Investigator in most of them. He has published more than 160 papers in national and international conference proceedings, magazines and journals. He has been guest editing more than 30 special issues in different journals and magazines in the last few years. He is member of the editorial board of 16 journals, most of them related to the topics being covered in this handbook. He has already supervised 10 PhD students, several of them recognized with honors. He is currently the Deputy Director for Knowledge Transfer of the University of Murcia.
Dharma P. Agrawal is the Ohio Board of Regents Distinguished Professor and the founding director for the Center for Distributed and Mobile Computing in the Department of Electrical Engineering and Computing Systems. He has been a faculty member at the ECE Dept., Carnegie Mellon University (on sabbatical leave), N.C. State University, Raleigh and the Wayne State University. His current research interests include applications of sensor networks in monitoring Parkinson’s disease patients and neurosis, applications of sensor networks in monitoring fitness of athletes’ personnel wellness, applications of sensor networks in monitoring firefighters physical condition in action, efficient secured communication in Sensor networks, secured group communication in Vehicular Networks, use of Femto cells in LTE technology and interference issues, heterogeneous wireless networks, and resource allocation and security in mesh networks for 4G technology. He has been the Program Chair and General Chair for numerous international conferences and meetings.He has been named as an ISI Highly Cited Researcher, is a Fellow of the IEEE, the ACM, the AAAS and the World Innovation Foundation, and a recent recipient of 2008 IEEE CS Harry Goode Award.
Deepak Gupta received his Master of Science degree from Illinois Institute of Technology, Chicago, USA, in the area of Computer Forensics and Cyber Security with a specialization in Voice Over Internet Protocol (VOIP). As an undergraduate student, he became certified on the major networking platforms, first as a CCNA (Cisco Certified Network Administrator) and then as a MCP (Microsoft Certified Professional) which would come to serve him well in his professional life. As a graduate student, Deepak continued to challenge himself by working on a number of research papers and projects related to Computer Network Security and Forensics Research, including the topics of multi-boot computer systems with change of boot loader and MP3 steganography. He also developed and furthered his interest in VOIP technology by working on and leading research projects with Bell Labs, a prominent VOIP research lab based in Chicago. Deepak also wrote research papers in this field on the topics of P2P communication and SIP protocols which won him the best student VOIP project award in 2007.