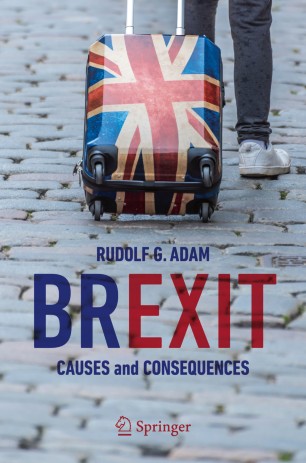 This book offers a comprehensive political assessment of Brexit. Based on a historical review of the role of the United Kingdom in the European Union, the author, a former diplomat at the German embassy in London, presents well-founded insights into arguments in favor and against the Brexit deal and the status quo of the Brexit negotiations. Furthermore, the book discusses the consequences of Brexit – for the UK and the rest of the EU, for security in Europe, and for the transatlantic relationship, as well as for global trade relations and the competitiveness of Europe and the UK.
This book offers a unique perspective of Britain’s troubled engagement with the continent. Everyone concerned with the future of Britain and of the EU should read it.
— Vernon Bogdanor, Professor of Politics, King’s College, London.
A must read for everyone interested in Brexit and its consequences – for the UK and for the EU.
— Wolfgang Ischinger, Chair, Munich Security Conference,
German Ambassador in London 2006–2008.
An excellently sourced book to which future historians will turn to as a trustworthy guide to this most complex crisis in Anglo-Continental relations. Simply a masterpiece.
— Thomas Kielinger, since 1998 correspondent in London.

Rudolf G. Adam was a diplomat for nearly forty years, serving e.g. in Singapore, Beijing and Moscow. His last posting was to London, where he ran the Embassy for a year as Chargé d’Affaires. He first visited England as a schoolboy when Harold Macmillan was Prime Minister. He studied at Oxford (Brasenose College), where he completed his D. Phil. He was also speechwriter for Federal President von Weizsäcker, Vice-President of the BND (Foreign Intelligence Service) and President of the Federal College for Security Studies. He is a regular contributor to Süddeutsche Zeitung, Cicero and other periodicals. He lectures frequently, holds a teaching assignment in Munich, and works as Senior Advisor for Berlin Global Advisors.

“Observers and practitioners would do well to heed Adam’s seasoned reflections as they edge towards an increasingly uncertain future.” (Michael Leigh, European Review of International Studies ERIS, Vol. 7 (1), 2020)