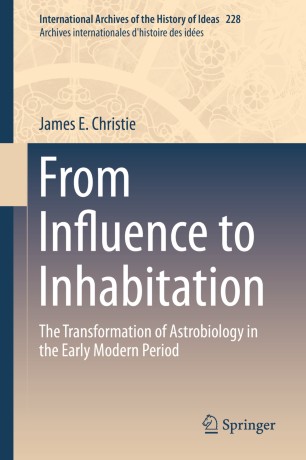 From Influence to Inhabitation

The Transformation of Astrobiology in the Early Modern Period

This book describes how and why the early modern period witnessed the marginalisation of astrology in Western natural philosophy, and the re-adoption of the cosmological view of the existence of a plurality of worlds in the universe, allowing the possibility of extraterrestrial life.

Founded in the mid-1990s, the discipline of astrobiology combines the search for extraterrestrial life with the study of terrestrial biology – especially its origins, its evolution and its presence in extreme environments. This book offers a history of astrobiology's attempts to understand the nature of life in a larger cosmological context. Specifically, it describes the shift of early modern cosmology from a paradigm of celestial influence to one of celestial inhabitation. Although these trends are regarded as consequences of Copernican cosmology, and hallmarks of a modern world view, they are usually addressed separately in the historical literature. Unlike others, this book takes a broad approach that examines the relationship of the two.

From Influence to Inhabitation will benefit both historians of astrology and historians of the extraterrestrial life debate, an audience which includes researchers and advanced students studying the history and philosophy of astrobiology. It will also appeal to historians of natural philosophy, science, astronomy and theology in the early modern period.