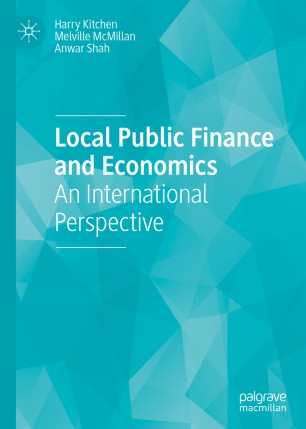 Globalization and the information revolution have highlighted the catalytic role of local governments for improving economic and social outcomes at the local level as well as growing the national economy by enhancing international competitiveness. This comprehensive account of local public finance and economics brings together principles and better practices for improving quality and access of local public services provision. The volume covers assignment of responsibilities; jurisdictional design; local service delivery; local regulation; local self-financing options such as income, sales, property and environmental taxation, user charges and fees; infrastructure finance options; and higher order government financing of local governments. The treatment is non-technical and suitable for a wide variety of audiences including scholars, instructors, students, media, policy advisers and practitioners.

Harry Kitchen is Professor Emeritus in the Economics Department at Trent University, Canada. Over the past twenty years, he has completed more than 100 articles, reports, studies, and books on issues relating to local government expenditures, finance, structure and governance in Canada. In addition, he has served as a consultant or advisor for a number of municipal and provincial governments in Canada and the federal government, and has worked on projects in Russia and China. In 2013, he was awarded a Queens Diamond Jubilee medal for policy analysis and research contributions to municipal finance, structure and governance in Canada. In 2017, he was appointed visiting scholar at the Institute of Municipal Finance and Governance, Munk School of Global Affairs, University of Toronto.

Melville McMillan is Professor Emeritus in the Department of Economics and a Fellow of the Institute of Public Economics at the University of Alberta, Canada.  McMillan’s research and teaching interests are in public economics, particularly urban and local economics, fiscal federalism, and the demand/supply of public goods and services. He has published in these areas and has advised governments and organizations nationally and internationally (e.g., the World Bank).  Although “retired,” McMillan remains actively involved in academic and policy matters.

“Local Public Finance and Economics: An International Perspective is a welcome and valuable addition on the subject. A book of this kind has been long overdue. … The book makes an interesting reading and has the potential to be a benchmark on the subject. … In addition, students and academicians in general and economists and political scientists in particular will immensely benefit from the book authored.” (V. N. Alok, Indian Journal of Public Administration, Vol. 66 (3), 2020)