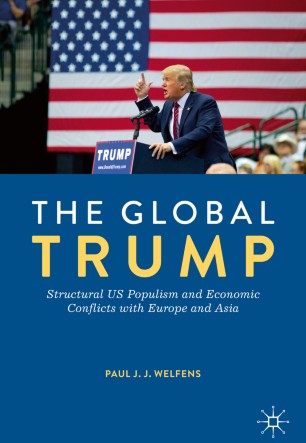 Structural US Populism and Economic Conflicts with Europe and Asia

"This book is able to explain and analyze what has eluded both scholars and thought leaders in business and the media - how and why populism has grabbed center stage. Highly recommendable."
-David B. Audretsch, Indiana University Bloomington, USA

"This critique of Trump´s fiscal and international trade policies and their weak intellectual basis deserves the attention of US and European readers alike"
-Richard H. Tilly, University of Münster, Germany

What lies behind the Trump victory of 2016 and the US' new raft of economic policies? Is a populist presidency in the United States likely to be a temporary phenomenon or a structural long-term challenge? In an era of declining multilateralism, what can the US still stand to learn from Europe, where several countries have effective lifetime economic welfare equal to that of the US - and what can the EU learn from the US in return? Furthermore, what international economic dynamics can be expected from the Sino-US trade conflict and can globalization be maintained? In this timely volume, Paul Welfens provides a rare, clear-sighted and scholarly analysis of the global problems created by Trump's protectionism and economic policy. He leverages his understanding of these problems to make concrete policy suggestions that could help prevent the world economy from falling back into a variant of the Great Powers regime of the late nineteenth century.