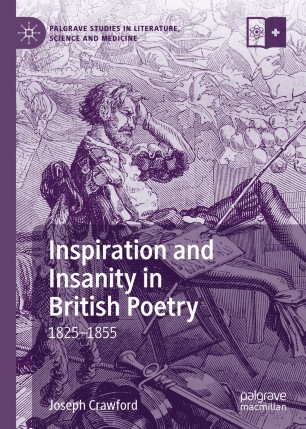 Inspiration and Insanity in British Poetry

This book explores the ways in which poetic inspiration came to be associated with madness in early nineteenth-century Britain. By examining the works of poets such as Barrett, Browning, Clare, Tennyson, Townshend, and the Spasmodics in relation to the burgeoning asylum system and shifting medical discourses of the period, it investigates the ways in which Britain’s post-Romantic poets understood their own poetic vocations within a cultural context that insistently linked poetic talent with illness and insanity. Joseph Crawford examines the popularity of mesmerism among the writers of the era, as an alternative system of medicine that provided a more sympathetic account of the nature of poetic genius, and investigates the persistent tension, found throughout the literary and medical writings of the period, between the Romantic ideal of the poet as a transcendent visionary genius and the ‘medico-psychological’ conception of poets as mere case studies in abnormal neurological development.