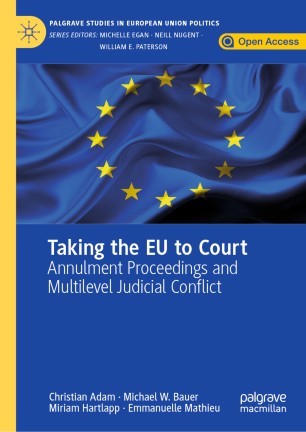 Taking the EU to Court

Michael W. Bauer holds the Jean Monnet Chair for Comparative Public Administration and Policy Analysis at the German University of Administrative Sciences Speyer. He is also a part-time professor at the School of Transnational Governance, European University Institute, Florence, Italy.

Miriam Hartlapp is Professor of Comparative Politics: Germany and France at the Freie University Berlin, Germany. She previously held chairs at Leipzig (2014–17) and Bremen University (2013–14) and worked at the Max Planck Institute for the Study of Societies in Cologne.

Emmanuelle Mathieu is Lecturer at the University of Lausanne, Switzerland. Previously, she was a Marie Curie research fellow at the Barcelona Institute for International Studies, Spain.