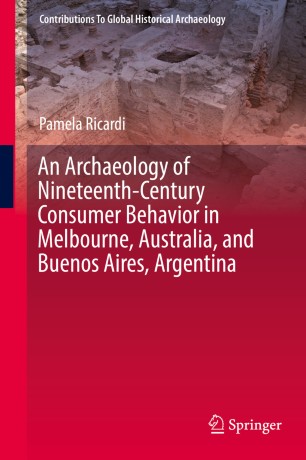 An Archaeology of Nineteenth-Century Consumer Behavior in Melbourne, Australia, and Buenos Aires, Argentina

This book compares consumer behavior in two nineteenth-century peripheral cities: Melbourne, Australia and Buenos Aires, Argentina. It provides an analysis of domestic archaeological assemblages from two inner-city working class neighborhood sites that were largely populated by recently arrived immigrants.The book also uses primary, historical documents to assess the place of these cities within global trade networks and explores the types of goods arriving into each city.

By comparing the assemblages and archival data it is possible to explore the role of choice, ethnicity, and class on consumer behavior. This approach is significant as it provides an archaeological assessment of consumer behavior which crosses socio-political divides, comparing a site within a British colony to a site in a former Spanish colony in South America.

As two geographically, politically and ethnically distinct cities it was expected that archaeological and archival data would reveal substantial variation. In reality, differences, although noted, were small. Broad similarities point to the far-reaching impact of colonialism and consumerism and widespread interconnectedness during the nineteenth century. This book demonstrates the wealth of information that can be gained from international comparisons that include sites outside the British Empire.

Pamela Ricardi is a historical archaeologist and visiting researcher in the School of Archaeology and Anthropology at the Australian National University, Canberra. She is also a heritage expert with the Australian Government Department of the Environment (Heritage Branch) with over ten years experience in cultural heritage management, in both the private and public sectors. This book is based on research undertaken for her doctoral dissertation at La Trobe University, Melbourne.