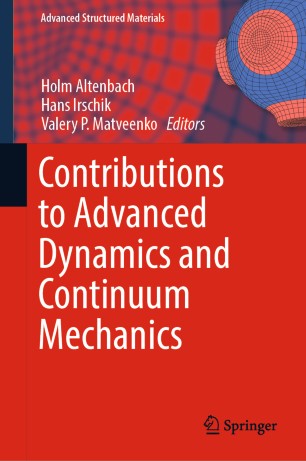 The book celebrates the 65th birthday of Prof. Alexander K. Belyaev—a well-known expert in the field of Dynamics of Mechanical Systems. In addition to reflecting Prof. Belyaev’s contributions, the papers gathered here address a range of current problems in Dynamics and Continuum Mechanics. All contributions were prepared by his friends and colleagues, and chiefly focus on theory and applications.

Prof. Dr.-Ing. habil. Dr. h.c. mult Holm Altenbach is a member of the International Association of Applied Mathematics and Mechanics, and of the International Research Center on Mathematics and Mechanics of Complex Systems (M&MoCS), Italy. He has held positions at the Otto-von-Guericke University of Magdeburg and at Martin Luther University of Halle-Wittenberg, Germany. He graduated from Leningrad Polytechnic Institute in 1985 (with a diploma on the Dynamics and Strength of Machines), where he defended his Ph.D. in 1983, and was awarded the title Doctor of Technical Sciences in 1987.

He has authored/co-authored/edited over 60 books (textbooks/monographs/proceedings) and ca. 380 scientific papers (including 250 peer-reviewed papers). Further, he has served as Managing Editor (2004 to 2014) and Editor-in-Chief (2005–to present) of the Journal of Applied Mathematics and Mechanics (ZAMM) – the oldest journal in Mechanics in Germany (founded by Richard von Mises in 1921), as an Advisory Editor of the journal Continuum Mechanics and Thermodynamics since 2011, as an Associate Editor of the journal Mechanics of Composites (Riga) since 2014, and as a Co-Editor of the Springer Series Advanced Structured Materials since 2010.  He has been honored with various awards, including the 1992 Krupp Award (Alexander von Humboldt Foundation); 2000 Best Paper of The Year from the Journal of Strain Analysis for Engineering Design; 2003 Gold Medal from the Faculty of Mechanical Engineering, Politechnika Lubelska, Lublin, Poland; 2004 Semko Medal from the National Technical University of Kharkov, Ukraine; 2007 Doctor honoris causa from the National Technical University Kharkov, Ukraine; 2011 Fellow of the Japanese Society for the Promotion of Science; 2014 Doctor honoris causa from the Ovidius University of Constanta, Romania; 2016 Doctor honoris causa from the Vekua Institute, Tbilisi, Georgia; and the 2018 Alexander von Humboldt Award (Poland).