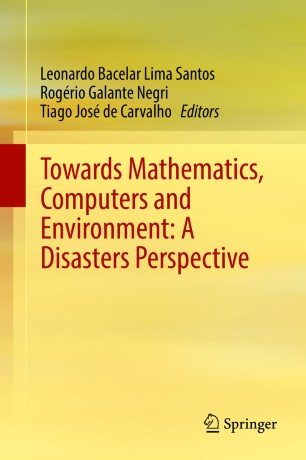 Towards Mathematics, Computers and Environment: A Disasters Perspective

With relevant, timely topics, this book gathers carefully selected, peer-reviewed scientific works and offers a glimpse of the state-of-the-art in disaster prevention research, with an emphasis on challenges in Latin America. Topics include studies on surface frost, an extreme meteorological event that occasionally affects parts of Argentina, Bolivia, Peru, and southern Brazil, with serious impacts on local economies; near-ground pollution concentration, which affects many industrial, overpopulated cities within Latin America; disaster risk reduction and management, which are represented by mathematical models designed to assess the potential impact of failures in complex networks; and the intricate dynamics of international armed conflicts, which can be modeled with the help of stochastic theory. The book offers a valuable resource for professors, researchers, and students from both mathematical and environmental sciences, civil defense coordinators, policymakers, and stakeholders.

Leonardo B. L. Santos is an adjunct researcher at the National Center for Early Warning of Natural Disasters (Cemaden), Brazil. He holds a PhD in Computing from the National Institute of Space Research (INPE, 2014) and a Bachelor’s degree in Physics from the Federal University of Bahia (UFBA, 2009). He received an honorable mention for a talk at the Institute for Pure and Applied Mathematics (IMPA, 2008) and twice as supervisor of best research (INPE, 2015 and 2016), having published more than 25 papers in journals and book chapters. He is the principal investigator of the Brazilian Society of Computational and Applied Mathematics (SBMAC) research group “Mathematics and Natural Disasters.”
Rogério G. Negri completed his Major’s degree in Mathematics (2006) at the São Paulo State University (UNESP), and his Master (2009) and PhD(2013) in Applied Computation at the Brazilian National Institute for Space Research (INPE), Brazil. He has experience in pattern recognition, radar image processing, geostatistics, and GIS. His recent research focuses on the development of image classification, segmentation, and change detection algorithms with applications on remote sensing data. He is currently a professor at Institute of Science and Technology, UNESP, Brazil.
Tiago Carvalho received his Bachelor’s degree in Computer Science from the Federal University of Juiz de Fora (UFJF), Brazil (2008). He holds a Master (2010) and a PhD (2014) degree, both in Computer Science, from the University of Campinas (Unicamp), Brazil. During his PhD he developed digital forensics methods for detecting image splicing in cooperation with some leading international research teams, including those led by Dr Hany Farid (Dartmouth College, USA) and by Dr Elli Angelopoulo (University of Erlangen-Nuremberg, Germany).