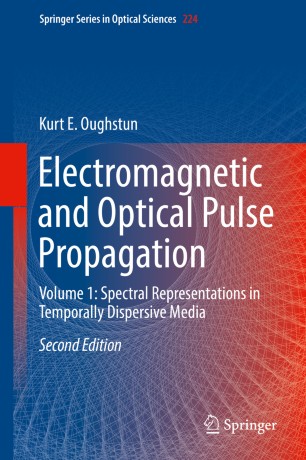 In two volumes, this book presents a detailed, systematic treatment of electromagnetics with application to the propagation of transient electromagnetic fields (including ultrawideband signals and ultrashort pulses) in dispersive absorptive media. This expanded, updated, and reorganized new edition presents a rigorous development of both time- and frequency-domain electromagnetics, from classical theory to current topics in applied research on temporally pulsed wave fields in dielectric, conducting, and semiconducting materials. With meaningful exercises throughout, it is suitable as a graduate textbook in electromagnetic wave theory and will be of use to researchers as a resource on electromagnetic radiation and wave propagation theory with applications to radar, imaging, communications, and safety issues.

Volume 1 develops the fundamental Maxwell-Lorentz theory of microscopic electromagnetics and its relationship to macroscopic electromagnetics in complex media with particular emphasis given to temporally dispersive materials, supplemented with several appendices on mathematical methods. The second edition includes new material on conjugate electromagnetic fields, time-reversal invariance, the four-potential and Lorentz invariance, anisotropic and spatially dispersive media, double-negative metamaterials, and generalized Fresnel reflection and refraction coefficients for complex media. The relationship between both the mathematical and physical interpretation of classical electromagnetic field theory with the special theory of relativity is emphasized throughout the volume.

Kurt Oughstun is a Professor of Electrical Engineering, Mathematics and Computer Science in the College of Engineering & Mathematics at the University of Vermont where he was University Scholar in the Basic and Applied Sciences. A graduate of The Institute of Optics at the University of Rochester, he is a Fellow of the Optical Society of America, a member of the European Optical Society and a member of the United States National Committee of the International Union of Radio Science. His research centers on electromagnetic and optical wave theory, asymptotic methods of analysis, and computational techniques. He has published extensively on his research in these areas in such journals as the Journal of the Optical Society of America A & B, Journal of the European Optical Society A, Physical Review A & E, Physical Review Letters, IEEE Proceedings, and Radio Science.