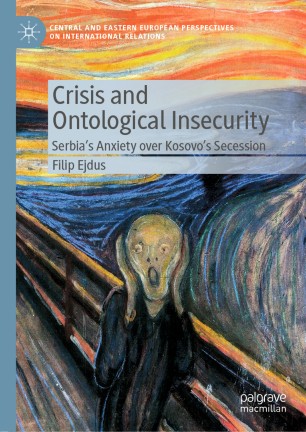 This book develops a novel way of thinking about crises in world politics. By building on ontological security theory, this work conceptualises critical situations as radical disjunctions that challenge the ability of collective agents to ‘go on’. These ontological crises bring into the realm of discursive consciousness four fundamental questions related to existence, finitude, relations and autobiography. In times of crisis, collective agents such as states are particularly attached to their ontic spaces, or spatial extensions of the self that cause collective identities to appear more firm and continuous. These theoretical arguments are illustrated in a case study looking at Serbia’s anxiety over the secession of Kosovo. The author argues that Serbia’s seemingly irrational and self-harming policy vis-à-vis Kosovo can be understood as a form of ontological self-help. It is a rational pursuit of biographical continuity and a healthy sense of self in the face of an ontological crisis triggered by the secession of a province that has been constructed as the ontic space of the Serbian nation since the late 19th century.

Filip Ejdus is Associate Professor of Security Studies in the Faculty of Political Science at the University of Belgrade, Serbia.