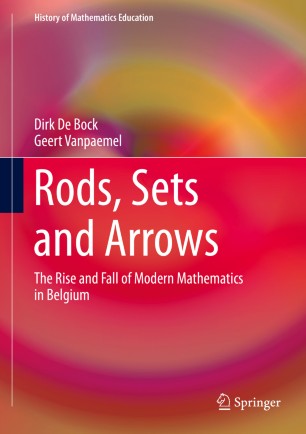 The Rise and Fall of Modern Mathematics in Belgium

Part of the History of Mathematics Education book series (HME)

For anyone interested in the history and effects of the introduction of so-called “Modern Mathematics” (or “Mathématique Moderne,” or “New Mathematics,” etc.) this book, by Dirk De Bock and Geert Vanpaemel, is essential reading.  The two authors are experienced and highly qualified Belgian scholars and the book looks carefully at events relating to school mathematics for the period from the end of World War II to 2010. Initially the book focuses on events which helped to define the modern mathematics revolution in Belgium before and during the 1960s. The book does much more than that, however, for it traces the influence of these events on national and international debates during the early phases of the reform.

By providing readers with translations into English of relevant sections of key Continental documents outlining the major ideas of leading Continental scholars who contributed to the “Mathématique Moderne” movement, this book makes available to a wide readership, the theoretical, social, and political backdrops of Continental new mathematics reforms. In particular, the book focuses on the contributions made by Belgians such as Paul Libois, Willy Servais, Frédérique Lenger, and Georges Papy.

The influence of modern mathematics fell away rapidly in the 1970s, however, and the authors trace the rise and fall, from that time into the 21st century, of a number of other approaches to school mathematics—in Belgium, in other Western European nations, and in North America.

In summary, this is an outstanding, landmark publication displaying the fruits of deep scholarship and careful research based on extensive analyses of primary sources.

Geert Vanpaemel is a Professor of History of Science and Science Communication at the University of Leuven (Belgium). His research concerns the history of science in Belgium since 1500, the history of universities and education, and the popularization of science.

“The main focus of the book Rods, Sets and Arrows is on an episode during a definite period in the history of Belgian mathematics education. … The book may hopefully encourage international readers and scholars to delve into research and to write an account of events and developments leading up to the present status of mathematics education in their own country.” (Kristín Bjarnadóttir, Educational Studies in Mathematics, Vol. 104, 2020)