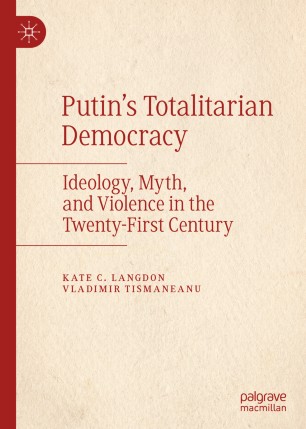 Ideology, Myth, and Violence in the Twenty-First Century

This book studies the cultural, societal, and ideological factors absent from popular discourse on Vladimir Putin’s Russia, contesting the misleading mainstream assumption that Putin is the all-powerful sovereign of Russia. In carefully examining the ideological underpinnings of Putinism—its tsarist and Soviet elements, its intellectual origins, its culturally reproductive nature, and its imperialist foreign policy—the authors reveal that an indoctrinating ideology and a willing population are simultaneously the most crucial yet overlooked keys to analyzing Putin’s totalitarian democracy. Because Putinism is part of a global wave of extreme political movements, the book also reaffirms the need to understand—but not accept—how and why nation-states and masses turn to nationalism, authoritarianism, or totalitarianism in modern times.
Kate C. Langdon is an Erasmus Mundus scholar. She studied at Vassar College in New York and Charles University in Prague.
Vladimir Tismaneanu is Professor in the Department of Government and Politics at the University of Maryland, College Park, and a Global Fellow at the Woodrow Wilson International Center for Scholars, USA.