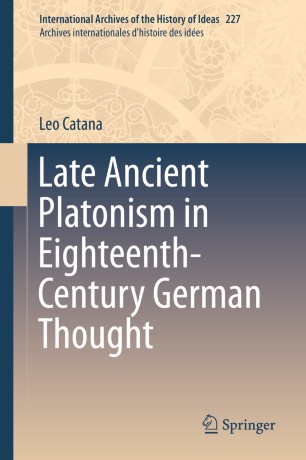 This work synthesizes work previously published in leading journals in the field into a coherent narrative that has a distinctive focus on Germany while also being aware of a broader European dimension. It argues that the German Lutheran Christoph August Heumann (1681-1764) marginalized the biographical approach to past philosophy and paved the way for the German Lutheran Johann Jacob Brucker’s (1696-1770) influential method for the writing of past philosophy, centred on depersonalised and abstract systems of philosophy. The work offers an authoritative and engaging account of how late ancient Platonism, Plotinus in particular, was interpreted in eighteenth-century Germany according to these new precepts. Moreover, it reveals the Lutheran religious assumptions of this new approach to past philosophy, which underpinned the works of Heumann and Brucker, but also influential reviews that rejected the English Plato translator Thomas Taylor (1758-1835) and his understanding and evaluation of late ancient Platonism.