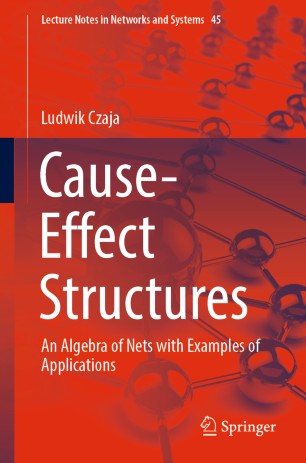 An Algebra of Nets with Examples of Applications

Part of the Lecture Notes in Networks and Systems book series (LNNS, volume 45)

This book presents a new algebraic system whose interpretation coincides with the behaviour of Petri nets, enhanced with an inhibitory mechanism and four time models. Its goal is to provide a formal means of modelling dynamic tasks, and of testing and verifying properties, in contexts characterised by the parallel execution of actions. However, the task description differs from that of Petri nets. The algebra is a quasi-semiring, “quasi” because of its somewhat restricted distributivity axiom. Expressions of this algebra, the cause–effect structures, have a graphic presentation as nets, but with one kind of named nodes, each annotated by two expressions that specify the type of signal reception from predecessors and transmission to successors. Many structural and behavioural properties are stated with proofs, and illustrative sample tasks are included. The book is intended for all those interested or involved in parallel and distributed computing – students, researchers and practitioners alike.