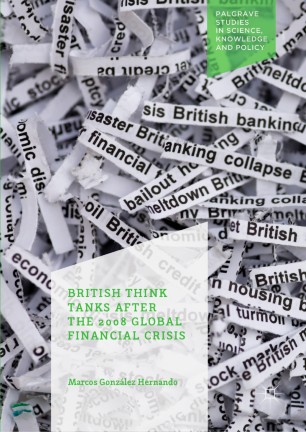 Part of the Palgrave Studies in Science, Knowledge and Policy book series (SKP)

This book examines the intellectual and institutional transformations of four British think tanks in the aftermath of the 2008 global financial crisis. In the context of a crisis of expert authority, González Hernando demonstrates how these organisations modified their mode of public engagement to be seen as authoritative as possible by an ever more mistrustful public.

British Think Tanks After the 2008 Global Financial Crisis connects sociological thinking on knowledge with research on policy change and the economic debate, through careful analysis of interviews, public accounts, and the ‘products’ of think tanks themselves.

González Hernando argues that demands for knowledge and advice that arose after the crisis energised the work of all four think tanks while also exposing internal tensions, affecting their sources of funding, transforming their institutional structure, and shaping how they engage with their audiences. It will appeal to students and scholars of sociology of knowledge, political sociology, policy studies, economic history, communication, political economy, organisational sociology, and British politics

Marcos González Hernando is Affiliated Researcher at the University of Cambridge, Senior Researcher at Think Tank for Action on Social Change (TASC), and Managing Editor at Distinktion: Journal of Social Theory.