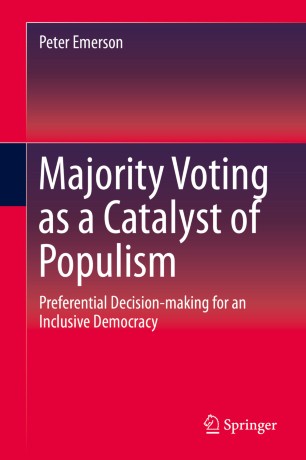 Majority Voting as a Catalyst of Populism

Preferential Decision-making for an Inclusive Democracy

This timely book presents a critique of binary majority rule and provides insights into why, in many instances, the outcome of a two-option ballot does not accurately reflect the will of the people. Based on the author's first-hand experience, majority-voting is argued to be a catalyst of populism and its divisive outcomes have prompted countless disputes throughout Europe and Asia. In like manner, simple majority rule is seen as a cause of conflict in war zones, and of dysfunction in so-called stable democracies. In order to safeguard democracy, an all-party power-sharing approach is proposed, which would make populism less attractive to voters and governments alike. In geographically arranged chapters, well-tested alternative voting procedures (e. g. non-majoritarian Modified Borda Count) are presented in case studies of Northern Ireland, Central Europe, the Balkans, the Caucasus, Russia, China, North Korea and Mongolia.

Peter Emerson is the director of the Belfast-based international NGO "The de Borda Institute". He has campaigned for inclusive governance since 1978. His publications include From Majority Rule to Inclusive Politics (Springer, 2016), Defining Democracy: Voting Procedures in Decision-Making, Elections and Governance (2nd ed. in 2012, Springer) and Designing an All-Inclusive Democracy: Consensual Voting Procedures for Use in Parliaments, Councils and Committees (Springer, 2007).