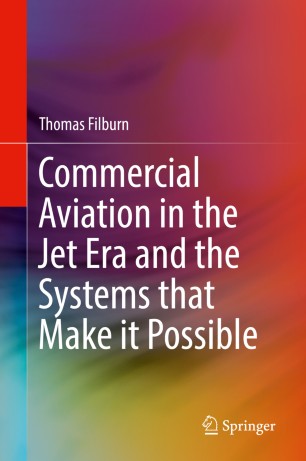 This book discusses the multiple systems that make commercial jet travel safe and convenient. The author starts by tracing the evolution of commercial jets from the Boeing 707 to the double decker Airbus A380. The next 7 chapters discuss flight controls, along with the high lift surfaces (flaps and slats) that are essential to allow high speed, low drag aircraft to take-off and land. The other systems include Engines/Nacelles, Cabin Pressurization and Air Conditioning systems, Landing Gear and brakes, Fuel Systems, Instruments/Sensors, and finally Deicing systems for the wings, nacelles and external air speed sensors. Case studies describe a significant accident that arose from a failure in the various systems described. The final chapter summarizes the past 60 years of jet travel and describe how these systems have created a cheaper, safer mode of travel than any other.

Thomas Filburn is Project Liaison in the Materials and Processes Engineering group at Pratt &Whitney Aircraft.  Previously he was  Director of Research, UTAS Program Office, United Technologies Research Center, in East Hartford, Connecticut.  He obtained his Ph.D. from the University of Connecticut in Chemical Engineering; he also holds a B.Sc. and M.S. in Mechanical Engineering from the University of Connecticut, Storrs CT. He has worked for Northeast Utilities, United Nuclear Corporation and United Technologies Corporation (UTC). Prior to joining the faculty at the University of Hartford he performed research for a liquid metal combustion system used for torpedo propulsion at the Applied Research Lab at Penn State University. His last assignment before joining the University was with the Space, Land and Sea group at Hamilton Sundstrand (UTC division), where he performed research on regenerative life support technologies for NASA. His research interests lie in the area of energy, sustainable design, greenhouse gas control and environmental design. He has published in Industrial and Engineering Chemical Research, the Fuels Journal of the American Chemical Society and has presented at many conferences. He holds 8 US patents for a variety of aerospace applications.