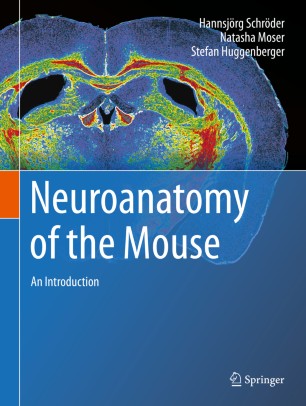 Neuroanatomy of the Mouse

This textbook describes the basic neuroanatomy of the laboratory mouse. The reader will be guided through the anatomy of the mouse nervous system with the help of abundant microphotographs and schemata. Learning objectives and summaries of key facts at the beginning of each chapter provide the reader with an overview on the most important information.

As transgenic mice are one of the most widely used paradigms when it comes to modeling human diseases, a basic understanding of the neuroanatomy of the mouse is of considerable value for all students and researchers in the neurosciences and pharmacy, but also in human and veterinary medicine. Accordingly, the authors have included, whenever possible, comparisons of the murine and the human nervous system.

The book is intended as a guide for all those who are about to embark on the structural, histochemical and functional phenotyping of the mouse’s central nervous system. It can serve as a practical handbook for students and early researchers, and as a reference book for neuroscience lectures and laboratories.

Prof. Dr. Hannsjörg Schröder is Head of Department II of Anatomy at the University Hospital of Cologne. His teaching focuses on the clinical neuroanatomy of humans and the comparative neuroanatomy of Rodentia for students of human medicine and neurosciences. His research focuses on topics of neurodegeneration using molecular histochemical methods.

Dr. Natasha Moser is a graduate biologist and lecturer at the Department II of Anatomy at the University Hospital of Cologne. She has been teaching macroscopic anatomy and neuroanatomy courses for many years for students of human and dental medicine as well as prospective physiotherapists. Her scientific interest focuses on neurodegeneration (Alzheimer's disease, Parkinson's disease) and nicotine receptors.

Dr. Stefan Huggenberger is zoologist and lecturer at the Department II of Anatomy at the University Hospital of Cologne. His research deals with the comparative anatomy of the senses of vertebrates, especially whales and dolphins. His expertise in this field is reflected in numerous scientific publications and several reference books.