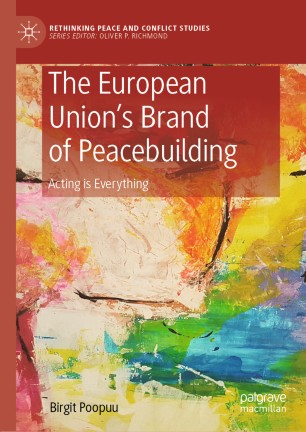 The European Union’s Brand of Peacebuilding

This book critically explores the European Union’s brand of peacebuilding in the form of its Common Security and Defence Policy (CSDP). A contextually close reading of EU missions – using the fluid categories of telling and acting, stressing the dialogical ways of being, and taking heed of the concept of just peace as a particular guide to building peace – allows the book to tap into the specific meanings the EU has of peace, the ways in which it imagines its relationships with its varied partners, and perhaps most controversially, the way that being/becoming a global actor has been front and center of the CSDP. The analysis focuses on three core missions in the Democratic Republic of the Congo, Bosnia-Herzegovina, and Kosovo. One of the recurring themes that emerges from the empirical chapters is the significance attached to acting, and that acting per se constitutes success of a mission, without much thought given to its substance, or the outcome of the EU’s engagement. The imaginative force of this book rests on developing a set of context-sensitive analytical tools, encapsulated in the dialogical model of identity formation and the dynamic approach to analysing identity through telling and acting.
Birgit Poopuu is Research Fellow at the Department of International Politics, Aberystwyth University, Wales. She previously studied at the University of Tartu, has published on the EU’s peacebuilding and is currently working on the project The Politics of Peace and Conflict Knowledge: Syria and the Diverse Landscape of Local Knowledge/Experience.