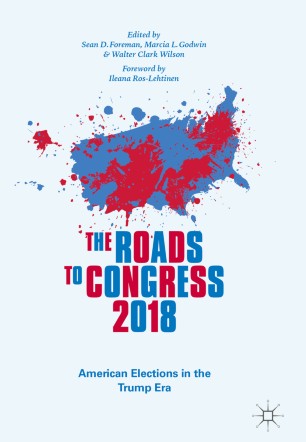 American Elections in the Trump Era

While the roads to Congress are often full of potholes, in 2018 many of those roads looked like mine fields. With partisan control of both chambers of Congress up for grabs in the first midterm of the Trump presidency and the theme of potential impeachment looming on both sides, The Roads to Congress 2018 offers inside views of this critical election through expert analysis and case studies of the year’s most high-profile races. Thematic chapters examine the intraparty battles occurring within both the Democratic and Republican parties, the use of social media as part of House and Senate campaigns (including Twitter use by and about President Trump), and the potential impact of an increasingly diverse Congressional candidate pool on the structure and functions of the national legislative branch. Additionally, key case studies written by local experts offer fresh analysis and original insights on a sampling of major campaigns spread across the country, featuring in-depth analyses of contentious U.S. House and Senate campaigns across the nation. This book illuminates the key themes and trends coming out of the 2018 midterm elections to help readers cast off the uncertainty that surrounds our politics, and to understand the dynamics of elections which may either herald the triumph or signal the demise of Trumpism.