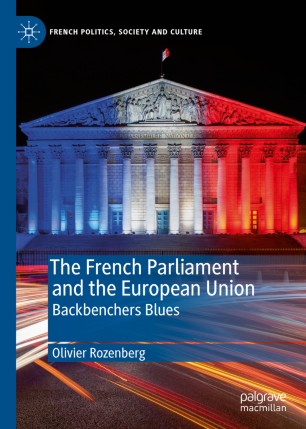 The French Parliament and the European Union

This book explores how the European Union has changed the French Parliament since 1992. It supports the view that the institutional adaptation of both assemblies to European affairs is largely superficial as it lacks a genuine involvement from members of parliament. Nevertheless, the role of backbenchers has changed in the context of European integration. New ways of behaving, thinking and representing have emerged. From specialized representatives to constituency members, from presidential aspirants to Eurosceptic sovereigntists, French national parliamentarians have adapted differently to the EU. Far beyond the sole scrutiny of European draft legislation, the book provides a comprehensive map of this changing environment. It supports the view that the process has been driven by the search for day-to-day emotional gratifications rather than utilitarian strategies.

“This book is another fine example of Olivier Rozenberg’s highly readable work on the subject of France’s relations with the EU. This time he distils his expert knowledge of the French National Assembly into an account that marries wry anecdote with analysis that is both careful and imaginative. Rozenberg draws on anthropology and psychology just as much as political science, and on two decades of painstaking fieldwork, to show us an institution in existential decline where France’s adaptation to Europe is but one small part of the picture.” (Helen Drake, Loughborough University London, UK)

“Avoiding the usual emphasis on institutional response to European integration, this book digs deeper, exploring the frustrations, emotional gratifications, motivations, and ‘blues’ of French MPs as they adapt to the EU. Drawing on interviews, observational evidence, and a broad range of numerical indicators, Rozenberg provides a comprehensive account of the Europeanisation of the French parliament, uncovering important aspects so far neglected by scholars. A must-read for anyone interested in parliamentary roles, legislatures, and modern French politics.” (Tapio Raunio, University of Tampere, Finland)

“Why do some parliamentarians engage in EU affairs more than others? In this important contribution, Olivier Rozenberg argues that conventional explanations have limited value for elucidating legislative behaviour in France. Relying on in-depth elite interviewing, he connects the varying levels of engagement in EU affairs to the types of behavioural and attitudinal roles that French MPs and senators adopt in political life. His findings are highly relevant not only for the understanding of French politics, but also more broadly for the study of European legislative politics.” (Radoslaw Zubek, Oxford University, UK)