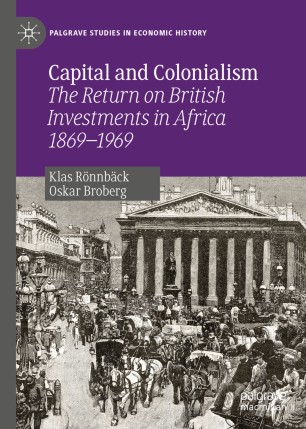 This book engages in the long-standing debate on the relationship between capitalism and colonialism. Specifically, Rönnbäck and Broberg study the interaction between imperialist policies, colonial institutions and financial markets. Their primary method of analysis is examining micro- and macro-level data relating to a large sample of ventures operating in Africa and traded on the London Stock Exchange between 1869 and 1969. Their study shows that the relationship between capital and colonialism was highly complex. While return from investing in African colonies on average was not extraordinary, there were certainly many occasions when investors enjoyed high return due to various forms of exploitation. While there were actors with rational calculations and deliberate strategies, there was also an important element of chance in determining the return on investment – not least in the mining sector, which overall was the most important business for investment in African ventures during this period. This book finally also demonstrates that the different paths of decolonization in Africa had very diverse effects for investors.