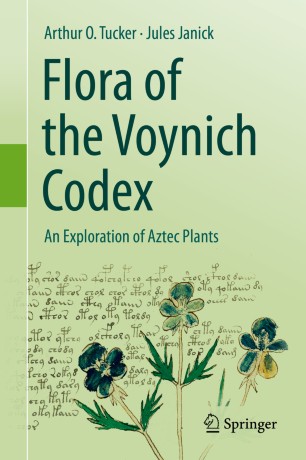 Flora of the Voynich Codex

An Exploration of Aztec Plants

The Voynich Codex is one the most fascinating and bizarre manuscripts in the world.  The manuscript (potentially equivalent to 232 pages), or more properly a codex, consists of many foldout pages. It has been divided by previous researchers into sections known as Herbal/Botanical/Pharmacology; Balenological/Biological; Cosmology; one page known as The Rosette; and a final Recipe section. All the sections contain text in an unknown writing system, yet to be deciphered.  Cryptological analyses by modern computer programs nevertheless have determined that the language is real and not a hoax, as has been suggested by some.

Despite the fact that this codex is largely an herbal, the interpreters of this manuscript with two exceptions, have not been botanists. To this end, our recent research suggests that the Voynich is a 16th century codex associated with indigenous Indians of Nueva España educated in schools established by the Spanish. This is a breakthrough in Voynich studies.  We are convinced that the Voynich codex is a document produced by Aztec descendants that has been unfiltered through Spanish editors.

The flora of New Spain is vast, and the medicinal and culinary herbs used by the Aztecs were equally as copious.  Even though it is our hypothesis that the Voynch Codex was written as a private herbal in 16th century New Spain, many of these herbs have relevance today because they or closely related species have been noted to be medicinal or have culinary value. The Voynich Codex has an estimated 359 illustration of plants (phytomorphs), 131 in the Herbal Section (large images) and 228 in the Pharmaceutical Section (small images of plant parts). In our book “Unraveling of the Voynich Codex”, to be published by Springer this summer, Tucker and Janick have partially identified species in the Herbal Section.  In this proposed work, all of the plants of the Herbal Section will be identified along with those plants of the Pharmacology Section where identification is feasible.  Each plant identification will include subdivisions to include descriptors (formal botanical identification), names in English, Spanish, and Mesoamerican names where known, ecology and range, and properties (medicinal and culinary) of these and related species. Photographs of the phytomorphs and contemporary plants will be included. These identifications represent hard evidence that the Voynich Codex is a 16th Century Mexican manuscript. Exploring the herbs of the Aztecs through the Voynich Codex will be a seminal work for all Voynich researchers and also of interest to a wider audience in medicinal and culinary herbs, artists, and historians.  In summary, our new book project Flora of the Voynich Codex will provide a photo-illustrated guide to complete the botanical evidence related to the Voynich Codex, one of the most valuable historic texts of the 16th century.