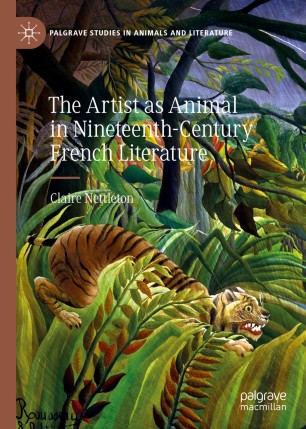 The Artist as Animal in Nineteenth-Century French Literature

The Artist as Animal in Nineteenth-Century French Literature traces the evolution of the relationship between artists and animals in fiction from the Second Empire to the fin de siècle. This book examines examples of visual literature, inspired by the struggles of artists such as Edouard Manet and Vincent van Gogh. Edmond and Jules de Goncourt’s Manette Salomon (1867), Émile Zola’s Therèse Raquin (1867), Jules Laforgue’s “At the Berlin Aquarium” (1895) and “Impressionism” (1883), Octave Mirbeau’s In the Sky (1892-1893) and Rachilde’s L’Animale (1893) depict vanguard painters and performers as being like animals, whose unique vision revolted against stifling traditions. Juxtaposing these literary works with contemporary animal theory (McHugh, Deleuze, Guattari and Derrida), zoo studies (Berger, Rothfels and Lippit) and feminism (Donovan, Adams and Haraway), Claire Nettleton explores the extent to which the nineteenth-century dissolution of the human subject contributed to a radical, modern aesthetic. Utilizing these interdisciplinary methodologies, Nettleton argues that while inducing anxiety regarding traditional humanist structures, the “artist-animal,” an embodiment of artistic liberation within an urban setting, is, at the same time, a paradigmatic trope of modernity.