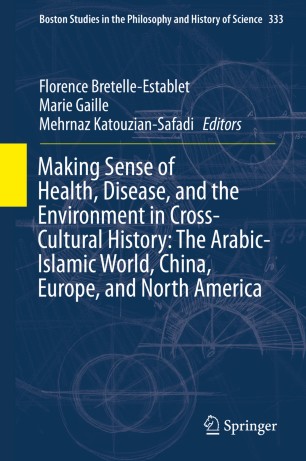 Making Sense of Health, Disease, and the Environment in Cross-Cultural History: The Arabic-Islamic World, China, Europe, and North America

Part of the Boston Studies in the Philosophy and History of Science book series (BSPS, volume 333)

This book has been defined around three important issues: the first sheds light on how people, in various philosophical, religious, and political contexts, understand the natural environment, and how the relationship between the environment and the body is perceived; the second focuses on the perceptions that a particular natural environment is good or bad for human health and examines the reasons behind such characterizations ; the third examines the promotion, in history, of specific practices to take advantage of the health benefits, or avoid the harm, caused by certain environments and also efforts made to change environments supposed to be harmful to human health. The feeling and/or the observation that the natural environment can have effects on human health have been, and are still commonly shared throughout the world. This led us to raise the issue of the links observed and believed to exist between human beings and the natural environment in a broad chronological and geographical framework. In this investigation, we bring the reader from ancient and late imperial China to the medieval Arab world up to medieval, modern, and contemporary Europe. This book does not examine these relationships through the prism of the knowledge of our modern contemporary European experience, which, still too often, leads to the feeling of totally different worlds. Rather, it questions protagonists who, in different times and in different places, have reflected, on their own terms, on the links between environment and health and tries to obtain a better understanding of why these links took the form they did in these precise contexts. This book targets an academic readership as well as an “informed audience”, for whom present issues of environment and health can be nourished by the reflections of the past.

Florence Bretelle-Establet is a senior researcher in history of science at SPHERE (UMR 7219, CNRS & Université Paris Diderot). Since her PhD (1999), devoted to the history of the social, political, and medical interactions between French military physicians sent, at the end of the nineteenth century, to the south of the Qing empire and the local population, she works on the history of medicine in late imperial southern China. She has published articles and book chapters on the social and cultural identities of the actors involved in medicine in late imperial China, on the circulation of medical knowledge all over the empire, or on the different medical writing genres that coexisted in this framework. She has edited several books, and for ten years, she has been one of the chief editors of the journal Extrême-Orient Extrême Occident.

Marie Gaille is a senior researcher in philosophy at SPHERE (UMR 7219, CNRS & Université Paris Diderot) and Adjunct Scientific Director at the Institute for Social sciences and Humanities of the CNRS. Marie Gaille’s research deals with ethical, political, and anthropological issues related to medicine considered as a social practice and a form of knowledge. Her research focuses on contemporary medical decision at the patient’s bedside in relationship with public health policies, and examines the relationship between health and the environment, in the various meanings of the word. It examines how epistemological choice, the conceptions of health and ethical values combine together to determine cure and care options. In addition, Marie Gaille has a strong interest for the history of medical thought, especially in the Renaissance era. She has published extensively on these fields of research and edited several books.Mehrnaz Katouzian-Safadi is a senior researcher in history of science at SPHERE (UMR 7219, CNRS & Université Paris Diderot). After her PHD in Biochemistry and in Biophysics, she studied the effects of porch environment on virus and nucleoprotein complexes in different CNRS laboratories. Since 1998, she has focused her work on the history of drugs and drugs effects on the body. Her research focuses on medieval pharmaceutical and medical writings in Arabic and in Persian and examines in particular Rhazes' (ca. 865 – 925) texts. She has published on medieval drug therapies for complex diseases such as smallpox, leprosy and melancholia, on the history of alchemy and on its role in drug production, on the historical uses of honey or clay in disease treatments. She is very interested in the different practices, beside drug therapies, that have been promoted in the medieval period and beyond to improve human health.