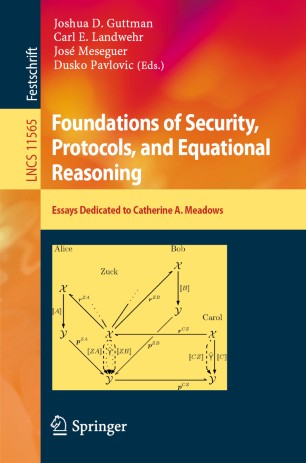 Essays Dedicated to Catherine A. Meadows

This Festschrift volume is published in honor of Catherine A. Meadows and contains essays presented at the Catherine Meadows Festschrift Symposium held in Fredericksburg, VA, USA, in May 2019.

Catherine A. Meadows has been a pioneer in developing symbolic formal verification methods and tools. Her NRL Protocol Analyzer, a tool and methodology that embodies symbolic model checking techniques, has been fruitfully applied to the analysis of many protocols and protocol standards and has had an enormous influence in the field. She also developed a new temporal logic to specify protocol properties, as well as new methods for analyzing various kinds of properties beyond secrecy such as authentication and resilience under Denial of Service (DoS) attacks and has made important contributions in other areas such as wireless protocol security, intrusion detection, and the relationship between computational and symbolic approaches to cryptography. This volume contains 14 contributions authored by researchers from Europe and North America. They reflect on the long-term evolution and future prospects of research in cryptographic protocol specification and verification.