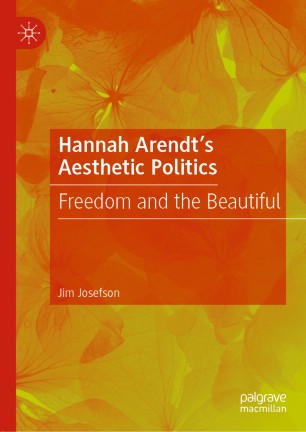 Freedom and the Beautiful

“Jim Josefson’s book is remarkably well-written, clearly with an eye on ‘the beautiful’: its style is vivid, free of jargon, yet at the same time sophisticated in the manner of the best Anglophone literature, unassuming but effective. He takes us through his elaboration of the Arendt-inspired new politics with ease and confidence. And the main idea is not only original but also very pertinent to our times.”
–Agata Bielik-Robson, Professor, Jewish Studies, University of Nottingham, UK
We face a crisis of public reason. Our quest for a politics that is free, moral and rational has, somehow, made it hard for us to move, to change our positions, to visit places and perspectives that are not our own, and to embrace reality. This book addresses this crisis with a model of public reason based in a new aesthetic reading of Hannah Arendt’s political theory. It begins by telling the story of Arendt’s engagement with the Augenblicke of Nietzsche, Kierkegaard, Jaspers, Heidegger, Kafka and Benjamin, in order to identify her own aesthetic Moment. Josefson then explicates this Moment, what he calls the freedom of the beautiful, as a third face of freedom on par with Arendt’s familiar freedoms of action and the life of the mind. He shows how this freedom, rooted in Jaspers’s phenomenology and a non-metaphysical reading of Kant, serves to redress the world-alienation that was a uniting theme across Arendt’s works. Ultimately, this volume aims to challenge orthodox accounts of Arendtian politics, presenting Arendt’s aesthetic politics as a radically new model of republicanism and as an alternative to political liberal, deliberative and agonistic models of public reason.