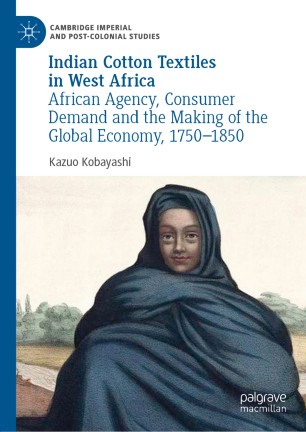 African Agency, Consumer Demand and the Making of the Global Economy, 1750–1850

‘A much-needed, excellently researched history of Senegambia’s non-slave trade role in global commerce, centred on the south-south trade in Indian cloths facilitated by both the French and British empires… The scholarship is of the highest quality.’

This book focuses on the significant role of West African consumers in the development of the global economy. It explores their demand for Indian cotton textiles and how their consumption shaped patterns of global trade, influencing economies and businesses from Western Europe to South Asia. In turn, the book examines how cotton textile production in southern India responded to this demand. Through this perspective of a south-south economic history, the study foregrounds African agency and considers the lasting impact on production and exports in South Asia. It also considers how European commercial and imperial expansion provided a complex web of networks, linking West African consumers and Indian weavers. Crucially, it demonstrates the emergence of the modern global economy.

Kazuo Kobayashi is Associate Professor of Economic History at Waseda University, Tokyo, Japan. He completed his PhD at the London School of Economics and Political Science, UK. His research and teaching focus on African and global economic history.

“Kobayashi’s illuminating focus on African agency invites us to assess the evolution of the global economy and the modern world from a hitherto overlooked perspective. In doing so, this book lights up corners of economic history previously unexplored, posing many more questions and opening new avenues of research. … this book places long-ignored African consumers, Indian artisans, and the cotton cloth that connected them, at the centre of the premodern world, throwing global history wide open to newer insights and interpretations.” (Alka Raman, The Economic History Review, Vol. 73 (3), 2020)