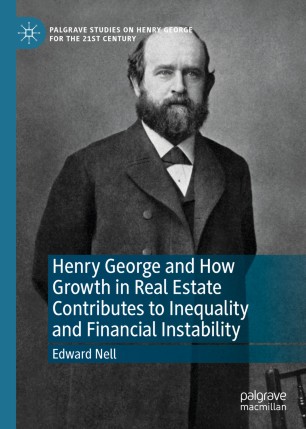 This Palgrave Pivot contextualizes Henry George as an important and uniquely American figure in the fields of economics and political economy, with special emphasis on the frontier and innovation. This book discusses George’s concept of rent as the result of economic progress, explains George’s argument that the rise in rents caused by economic progress in turn generates inequality and poverty, and examines the relevance of these ideas in today’s financialized global economy. This book adds to the very necessary discussion of whether our current financial industry is a benefit or a drain on human economic well-being.

Edward Nell is Professor Emeritus at the New School for Social Research in New York City. Nell has been a member of The New School faculty since 1969, and held the position of Malcolm B. Smith Professor of Economics from 1990 to his retirement in 2014. Since then he has become Chief Economist for the London-based Eco-Capacity Exchange (RECIPCO) and Vice-President of the Henry George School of Social Science in New York. Nell’s contributions are in the fields of Macroeconomic Theory, Monetary Analysis and Finance, Economic Methodology and Philosophy, focusing on his theory of Transformational Growth and Development. He has written twenty-seven books, and his articles on economic theory and methodology have appeared in leading journals like American Economic Review, Journal of Political Economy, Journal of Economic Literature, Cambridge Journal of Economics, Eastern Economic Journal, Review of Political Economy, Economic Development and Cultural Change, Analysis, and Social Research.