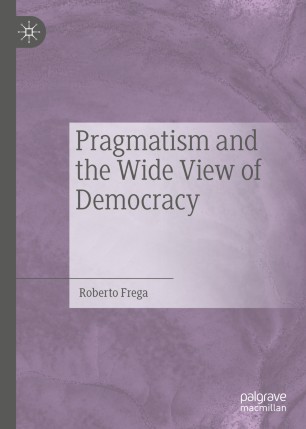 Pragmatism and the Wide View of Democracy

‘In times of defiant populism, a refreshing, thought-provoking invitation to reorient attention from peoples to publics comes from Frega’s lucid reconstruction of the elective affinity of democracy and pragmatism. Frega’s wide view of democracy is an authentic must-read for democrats and pragmatists alike.’

'"The cure for the ills of Democracy,” wrote Jane Addams, "is more Democracy.”  Roberto Frega amends Addams to say that the cure is a “wide view of democracy”—one that encompasses our habits, social interactions, and forms of organization.  Through a systematic philosophical, sociological and political analysis, Frega reveals how an inclusive group life and experimentalist institutions can revive our flagging democratic fortunes.'

The aim of this book is to provide a fresh, wider, and more compelling account of democracy than the one we usually find in conventional contemporary political theory. Telling the story of democracy as a broad societal project rather than as merely a political regime, Frega delivers an account more in tune with our everyday experience and ordinary intuitions, bringing back into political theory the notion that democracy denotes first and foremost a form of society, and only secondarily a specific political regime.

The theoretical shift accomplished is major. Claiming that such a view of democracy is capable of replacing the mainstream categories of justice, freedom and non-domination in their hegemonic function of all-encompassing political concepts, Frega then argues for democracy as the broader normative framework within which to rethink the meaning and forms of associated living in all spheres of personal, social, economic, and political life. Drawing on diverse traditions of American pragmatism and critical theory, as well as tackling political issues which are at the core of contemporary theoretical debates, this book invites a rethinking of political theory to one more concerned with the political circumstances of social life, rather than remaining confined in the narrowly circumscribed space of a theory of government.

Roberto Frega (PhD) is a senior researcher in Philosophy at the Centre National de la Recherche Scientifique (CNRS) in Paris, France. He has published books on social theories of normativity (Les sources sociales de la normativitè, 2013), and pragmatist moral and political philosophy (Practice, Judgment, and the Challenged of Moral and Political Disagreement. A Pragmatist Account, 2012) as well as over thirty articles on contemporary moral and political philosophy.