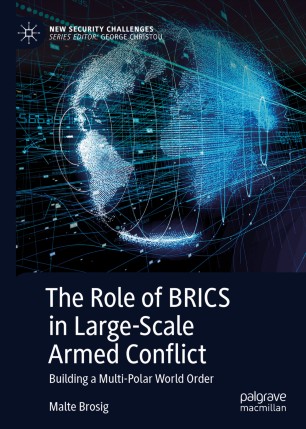 The Role of BRICS in Large-Scale Armed Conflict

This book explores how BRICS countries respond to, and get involved in, large scale armed conflict. It argues that through responding to armed conflict and deviating from the preferred Western foreign policy, BRICS countries are actively involved in building a multi-polar and post-western world order. The author develops a concise typology of response types portraying a nuanced picture of the BRICS grouping. Responses reach from non-coercive and cooperative multi-lateral behaviour reaching to neo-imperial unilateralism and military intervention. The book explains the selection of response types with reference to six variables which refer to the proximity to war, availability of power resources, the type of conflict, economic interests, the BRICS normative agenda and global humanitarian norms. Four armed conflicts in Libya, Syria, South Sudan and the Ukraine are chosen to illustrate the BRICS engagement with large scale armed conflicts.

Malte Brosig is Associate Professor in International Relations at the University of the Witwatersrand, in Johannesburg, South Africa