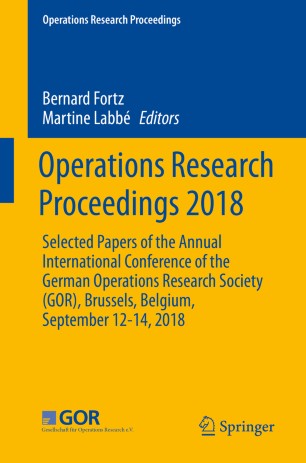 This book gathers a selection of peer-reviewed papers presented at the International Conference on Operations Research (OR 2018), which was held at the Free University of Brussels, Belgium on September 12 - 14, 2018, and was jointly organized by the German Operations Research Society (GOR) and the Belgian Operational Research Society (ORBEL). 575 scientists, practitioners and students from mathematics, computer science, business/economics and related fields attended the conference and presented more than 400 papers in parallel topic streams, as well as special award sessions.
The respective papers discuss classical mathematical optimization, statistics and simulation techniques. These are complemented by computer science methods, and by tools for processing data, designing and implementing information systems. The book also examines recent advances in information technology, which allow big data volumes to be processed and enable real-time predictive and prescriptive business analytics to drive decisions and actions. Lastly, it includes problems modeled and treated while taking into account uncertainty, risk management, behavioral issues, etc.

Bernard Fortz is Professor in the Computer Science Department of Université Libre de Bruxelles (ULB) since 2006. He is currently head of the "Graphs and Mathematical Optimization" team. He holds a master degree in mathematics from the University of Namur (1993) and a Ph.D. degree in Operations Research, obtained in ULB in 1998. He then worked as postdoctoral researcher at AT&T Research-Labs and Maastricht University.  From 2000 to 2006 he was associate professor at the Louvain School of Management (Université Catholique de Louvain).His main research interests are combinatorial optimization, network design applications, optimization of routing protocols in telecommunications networks, bilevel optimization and applications in energy. He is associate editor of INFORMS Journal on Computing and International Transactions on Operational Research and coordinator of the EURO Working Group on Network Optimization (ENOG). From 2012 to 2017 he has also been coordinator of the inter-university attraction center "Combinatorial Optimization: Meta-heuristics and Exact Methods" funded by the Belgian federal government. Since May 2015 he is vice-head of the cross-border team INOCS, a partnership between INRIA Lille and ULB.Martine Labbé is full professor at the Université Libre de Bruxelles (ULB). Her main research area is combinatorial optimization, including graph theory and integer programming problems and with a particular emphasis on location and network design problems. She is also specialized in bilevel programming and studies pricing problems and Stackelberg games. She served on the editorial boards of Discrete Optimization, Journal on Combinatorial Optimization, Operations Research, Operations Research Letters and Transportation Science. She is now the Editor in Chief of the EURO Journal on Computational Optimization. She is the author or co-author of more than 120 papers published in international journals. In 2007 - 2008 she was president of EURO, the Association of European Operational Research Societies. In the years 2014 and 2015 she was  Vice-Chair of the SIAM Activity Group on Optimization (SIAG/OPT).