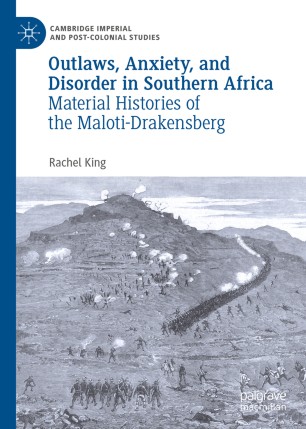 Material Histories of the Maloti-Drakensberg

This book explores how objects, landscapes, and architecture were at the heart of how people imagined outlaws and disorder in colonial southern Africa. Drawing on evidence from several disciplines, it chronicles how cattle raiders were created, pursued, and controlled, and how modern scholarship strives to reconstruct pasts of disruption and deviance. Through a series of vignettes, Rachel King uses excavated material, rock art, archival texts, and object collections to explore different facets of how disorderly figures were shaped through impressions of places and material culture as much as actual transgression. Addressing themes from mobility to wilderness, historiography to violence, resistance to development, King details the world that raiders made over the last two centuries in southern Africa while also critiquing scholars’ tools for describing this world. Offering inter-disciplinary perspectives on the past in Africa’s southernmost mountains, this book grapples with concepts relevant to those interested in rule-breakers and rule-makers, both in Africa and the wider world.