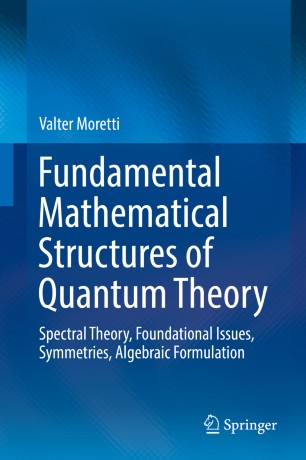 This textbook presents in a concise and self-contained way the advanced fundamental mathematical structures in quantum theory. It is based on lectures prepared for a 6 months course for MSc students. The reader is introduced to the beautiful interconnection between logic, lattice theory, general probability theory, and general spectral theory including the basic theory of von Neumann algebras and of the algebraic formulation, naturally arising in the study of the mathematical machinery of quantum theories. Some general results concerning hidden-variable interpretations of QM such as Gleason's and  the Kochen-Specker theorems and the related notions of realism and non-contextuality are carefully discussed. This is done also in relation  with the famous Bell (BCHSH) inequality concerning local causality.
Written in a didactic style, this book includes many examples and solved exercises.
The work is organized as follows. Chapter 1 reviews some elementary facts and properties of quantum systems. Chapter 2 and 3 present the main results of spectral analysis in complex Hilbert spaces. Chapter 4 introduces the point of view of the orthomodular lattices' theory. Quantum theory form this perspective turns out to the probability measure theory on the non-Boolean lattice of elementary observables and Gleason's theorem characterizes all these measures. Chapter 5 deals with some philosophical and interpretative aspects of quantum theory like hidden-variable formulations of QM. The Kochen-Specker theorem and its implications are analyzed also in relation BCHSH inequality, entanglement, realism, locality, and non-contextuality. Chapter 6 focuses on the algebra of observables also in the presence of superselection rules introducing the notion of von Neumann algebra. Chapter 7 offers the idea of (groups of) quantum symmetry, in particular, illustrated in terms of Wigner and Kadison theorems. Chapter 8 deals with the elementary ideas and results of the so called algebraic formulation of quantum theories in terms of both *-algebras and C*-algebras.
This book should appeal to a dual readership: on one hand mathematicians that wish to acquire the tools that unlock the physical aspects of quantum theories; on the other physicists eager to solidify their understanding of the mathematical scaffolding of quantum theories.

“The book can be read on the basis of an elementary knowledge of Hilbert spaces and measure theory. For mathematicians, it can be used as an introduction to Quantum Mechanics and a detailed guide to the associated mathematical problems; for the reader familiar with Quantum Mechanics, it provides an extensive insight into the mathematical discussion of its structural and foundational issues.” (Giovanni Morchio, Mathematical Reviews, June, 2020)